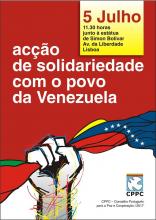 The Portuguese Council for Peace and Cooperation (CPPC) organized an action in solidarity with the people of Venezuela on July 5th, day of the 206th anniversary of the Venezuelan Independence.
The public initiative had the strong and committed presence of citizens and organizations in solidarity with the Bolivarian Revolution and the Venezuelan people and counted with the participation of CPPC’s National Board President, Ilda Figueiredo, of the Ambassador of the Bolivarian Republic of Venezuela, General in Chief Lúcas Ríncon Romero and also of the Ambassador of the Republic of Cuba, Johana Tablada.
In the speeches the solidarity of CPPC, and all present, towards the Bolivarian Revolution and the Venezuelan people was clearly expressed, as was denounced the action of interference and destabilization, alongside an intense media war of disinformation, that targets Venezuela aiming at paralysing its legitimate government, attacking the Venezuelan Constitution and the Bolivarian process with its conquests.

Venezuela is the target of action interference and destabilization that, while exploring real economic problems, seeks to paralyze the action of its legitimate government, confront the Venezuelan Constitution and attack the Bolivarian process and its achievements.

The interests of the Venezuelan people are not the motive for the economic boycott, hoarding and speculation. Democratic values are not behind the acts of violence with which reactionary and extreme-right groups try to instil chaos in that Country. Truth is not defended when a democratically elected government trying to maintain order and defend the law and Constitution is portrayed as oppressive. The interests of Venezuela and the values of peace are not behind the actions of an “opposition” that instigates foreign aggression against Venezuela.

What is truly at stake in Venezuela is an attempt of coup d’état against a sovereign country, against its Constitution and legitimate government. An antidemocratic coop, attack against the sovereignty and independence of Bolivarian Venezuela, directed against all those that continue committed to building a future of social progress, of sovereign affirmation and cooperation among the States of Latin America, in defence of the interests of workers and peoples of that region.

The true objective behind the manoeuvres of interference and destabilization against Venezuela and the associated campaigns of lies and manipulation is the attempt to recover the domination of the US, in check because of the progressive processes in Latin America.

To be on the side of the Venezuelan people, their rights and the truth means being on the side of those who, after Honduras, Paraguay and Brazil, resist an additional attempt of coup d’état in Latin America. Is to have solidarity with the people of Venezuela in the defence of their sovereignty. Is to reject the criminal economic, media, politic and diplomatic war against Venezuela, a country that received so many Portuguese emigrants.

Speech by Ilda Figueiredo in the public action:

Mr. Ambassador of Venezuela to Portugal

On behalf of the Portuguese Council for Peace and Cooperation, a special greeting to the Bolivarian Republic of Venezuela, to the government of Nicolás Maduro, represented here by Mr. Ambassador in Portugal, General en Jefe Lucas Enrique Ricón Romero, and to all Venezuelans on this day celebrating the Independence of Venezuela.

I would also like to greet all those who wanted to associate themselves with this moment of solidarity with the progressive forces and with the Venezuelan people at this difficult stage in which Venezuela is being subjected to an intervention and destabilisation that aims to paralyse the activity of its legitimate government, to confront the Venezuelan Constitution and attack the Bolivarian process and its achievements.

Recent events, namely armed terrorist attacks using a helicopter stolen from a military base on last June 27, against the headquarters of a Ministry and the Supreme Court of Justice in Caracas, are part of an intensifying putschist escalation against the Constitution of the Bolivarian Republic of Venezuela, always accompanied by an aggressive ideological campaign, as we are witnessing in Portugal, reminding other serious moments of dangerous situations, like that of democratic Chile of Salvador Allende and the fascist coup which followed, or, more recently, in Honduras, Paraguay, and Brazil.

That is why we are here to salute the determination of the Venezuelan government to stop the attempts by these violent and aggressive forces to start a civil war in the country, against interference and coup in Venezuela.

What is really at stake in Venezuela is an attempted coup against a sovereign country, against its Constitution and its legitimate government. An anti-democratic coup, an attack on the sovereignty and independence of Bolivarian Venezuela, aimed against all those who are committed to build a future of social progress, sovereign affirmation and cooperation among Latin American states, in the interest of the workers and peoples of that region.

The real aim behind the manoeuvres of interference and destabilisation against Venezuela and the campaigns of lies and manipulation that accompany them is the attempt to restore US domination, which has been called into question by progressive processes in Latin America".

That is why, the Portuguese Council for Peace and Cooperation and the Portuguese progressive organisations and social movements represented here, join their voices with all the forces that defend the sovereignty of nations in resistance against the policy of interference, threats and aggressions in which the foreign policy of the US and its allies is based.

We have taken a solidary stand on several occasions during these 17 years of Bolivarian revolution, and closely followed the profound democratic changes, in the various economic, social and cultural fields, which restored dignity to tens of millions of Venezuelans, and the important contribution of the Venezuelan people, with Presidents Chavez and Maduro, for the liberating emancipation of the peoples of Latin America.

But we know, from the recent history of Latin America, the policy of continuing interference and increasing militarization in the region that the United States continue to practice, whether with threats and economic blockade against Cuba, or in support of the more reactionary forces of the fascist and unpatriotic right-wing in several countries, which, as in the case of Venezuela, spare no means to seize power, even if their actions cost the lives of fellow countrymen, destabilisation and handing of their countries to the foreign domination.

The promotion of coups, by force or under the cloak of legal processes, is a tactic of US imperialism to regain control of the region, dissatisfied with the process of building independence in several countries, a process in which the Bolivarian Republic of Venezuela has played a pivotal role. Hence, given the strong resistance of the Venezuelan people against these manoeuvres, the reactionary forces once again resort to an economic and media war, to attempts of coup and to violence.

We stand here alongside the Venezuelan people, their rights and the truth, which means being on the side of those who, after Honduras, Paraguay and Brazil, resist yet another coup attempt on the Latin American continent.

We stand here to lend solidarity to the people of Venezuela, defending their sovereignty, rejecting the criminal economic, media, political and diplomatic war against a country that has welcomed so many Portuguese emigrants.

We support the resolve of the Venezuelan people to continue to govern their destiny, with the latest initiative of President Nicolás Maduro’s government to convene for July 30 a popular constitutional process, a form of participatory democracy that they have the right to organise, calling the Venezuelan people to exercise their right to vote to elect the members of the National Constituent Assembly.

We reaffirm our solidarity against the coup attempts, defending the security and tranquillity of the Venezuelan people, and their right to defend their independence in the search for a peaceful and sovereign process that will build the way out of the crisis in the country. 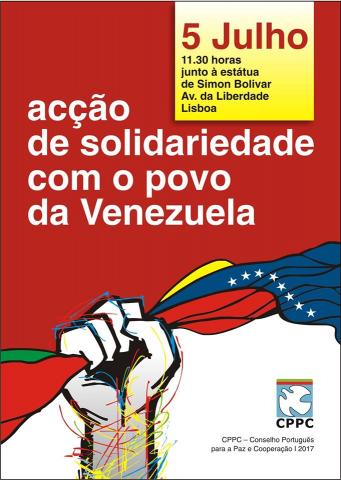 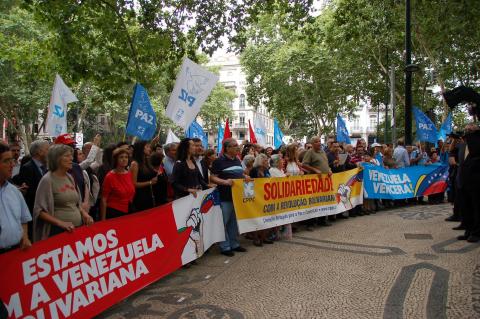 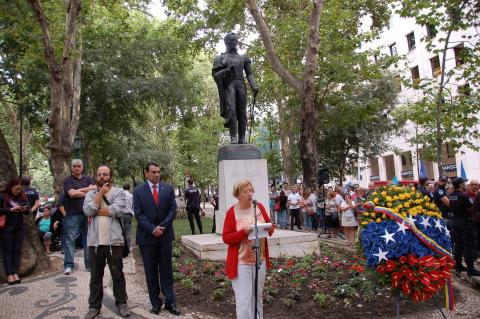 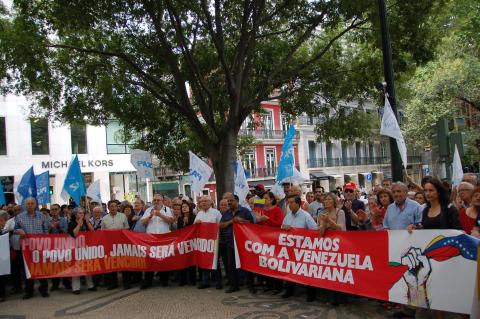 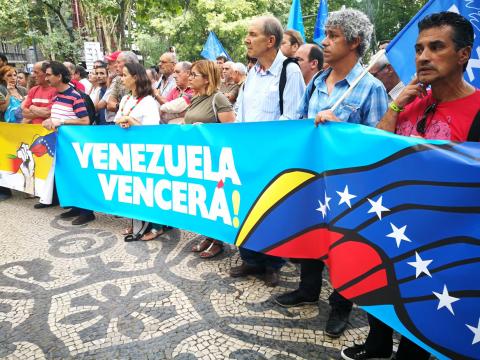 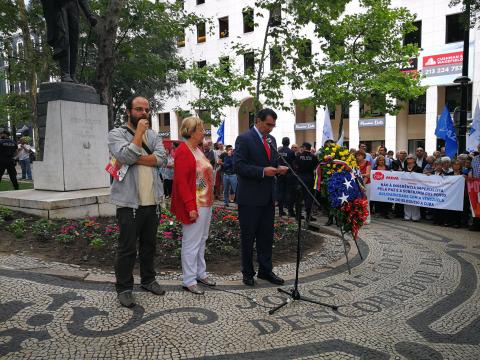 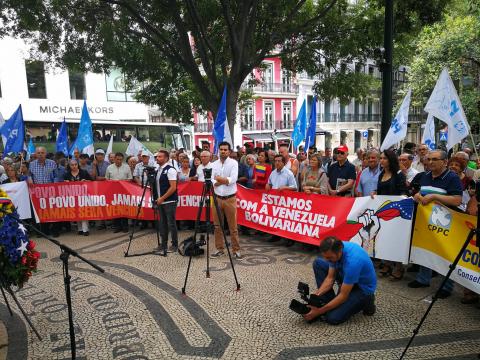