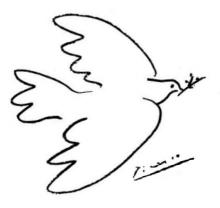 The Cyprus Peace Council (CPC) denounces in the strongest possible terms the transformation of the occupied territories of Cyprus by Turkey into a launching pad for waging military operations and spy activities in the wider region of the Eastern Mediterranean. We denounce the use of the illegal civilian airport in the occupied village of Lefkoniko for military purposes with the transporting of unmanned military planes from Turkey and the planned construction of a naval base in occupied Trikomo for monitoring Turkey's illegal drilling in the Exclusive Economic Zone of Cyprus. The fact that these unmanned aircraft can carry weapons systems is exacerbating the already tense situation in the Eastern Mediterranean region.

Turkey's new military plans with the deployment of new weapons systems and the construction of bases pose tremendous dangers for our country and people. Turkey's new moves serve its expansive aspirations in Cyprus and the region of the Eastern Mediterranean. These actions, as well as the ongoing militarization of Cyprus, create more obstacles to the negotiation process and move us away from the goal of resolving the Cyprus problem with unpredictable consequences for all Cypriots.

For some time now we have been sounding the alarm that, so long as the stagnation surrounding the Cyprus problem continues, Turkey is emboldened and new fait accompli are created that move us away from the negotiation procedure and bring us closer to partition. Instead of focusing on trying to resolve the Cyprus problem, the Anastasiades government chose to focus on the further militarization of Cyprus. It chooses to step up its military activity by shackling Cyprus to the NATO machine and the EU’s military structures, concluding military agreements with Israel, the US, France and integrating our country into the Permanent Structured Cooperation (PESCO), granting permission for the use of land, sea, ports and airports for military activities. Turkey’s recent timid condemnation by the EU Commission has no real impact on Turkey's aggressive policy.

The Cyprus Peace Council will continue to struggle against the militarization of Cyprus, putting forth the longstanding slogan "All foreign troops out of Cyprus! For an independent Cyprus!” Cyprus must be liberated, reunited and freed from all armies and foreign “guardians”. The critical nature of the situation on the Cyprus problem demands joint action by all peace-loving forces in both communities. Greek Cypriots and Turkish Cypriots united will resist the efforts to move us away from the procedure for the solution of the Cyprus problem and will struggle for peace and the solution of Bi-zonal, bi-communal federation. The people of Cyprus have paid a heavy price over the last decades. It's time for a solution and PEACE!

The Secretariat of the CPC