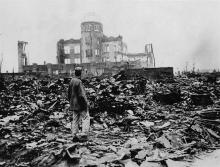 Seventy-one years ago, the world watched, horrified, to the inauguration of the use of nuclear weapons by the United States, at the end of World War II. Seven decades ago, what was unimaginable hit humankind with a frontal blow and marked our history with a stain of terror that can never be erased, on the 6th and 9th of August, 1945.

The first deployment of these weapons of mass destruction drove us to commit to and push forward a struggle that we fight until this day, for the complete abolition of nuclear arsenals and the prohibition of their development. Each year, we pay homage to the Japanese people in the horrendous martyrdom imposed to Hiroshima and Nagasaki, reaffirming our determination for the non-repetition of this tragedy.

However, despite our homages and perplexity with the facts and numbers of this event in history, when between 200,000 and 300,000 people were massacred by the US nuclear onslaught – which are still favored by impunity – our struggle is ongoing; it faces serious obstacles and must be promoted. The use of nuclear arsenals as an instrument of foreign policy, after all, is still considered a dissuasive tactic by the US and its allies in the North Atlantic Treaty Organization (NATO).

Despite the peoples' protests all over the world against the nuclear arsenals and despite the denunciation by the nuclear powers' citizens, or of NATO's highly militarized member countries, opposing these threats to humankind, the empire's bosses dare to bet on and gamble with the lives of millions of people and risk a policy of terror by not only modernizing their nuclear weapons but also by spreading these instruments of death over different countries. Through NATO's nuclear sharing program, the US keeps arsenals in military bases in Germany, Belgium, Italy, Holland and Turkey.

The World Peace Council has recovered the campaign we launched still in 1950, the Stockholm Appeal, for the complete abolition of nuclear arsenals and other weapons of mass destruction. Over six decades ago, this appeal gathered the signatures of hundreds of millions of people who were concerned with the threat of annihilation and with the catastrophe announced by the deployment of these weapons by leaders that gave themselves the role of masters of the world's fate.

If all nuclear warheads are counted, the total is of about 15,395 artifacts, according to the Stockholm International Peace Research Institute (SIPRI). Despite the slight reduction in comparison with 2015 – in about 500 warheads – experts have pointed, with concern, to the arsenals' modernization, which makes their reach and potential for devastation exponential. SIPRI has underlined, in June 2016, that the US plans on spending US$ 348 billion between 2015 and 2024 in maintenance and adaptation of its nuclear forces and US$ 1 trillion in the next three decades in their modernization.

The entry into force, in 1970, of the Non-Proliferation Treaty (NPT), despite the symbolism of its promises, did not bring great compromises in effective terms by those owning these arsenals. Today, 191 states are party to this treaty and 93 have signed it.

Every five years the NPT's review conferences, aiming to deepen commitments, debate the complete prohibition and mechanisms to verify this abolition. However, the peoples have seen their wish for a world free of the nuclear threat frustrated. It was the case with the ninth conference, held in 2015, which ended with no effective development, especially due to disagreement by Israel – which is not a party to the NPT and counts on the US support – with the determination of a deadline for the declaration of the Middle East as a region free of nuclear weapons.

Therefore, the members of the World Peace Council have been engaged in campaigns and actions involving the peoples in their countries in the struggle for the abolition of this threat to humankind. The growing confrontations and wars imposed by the US and its European allies, with their imperialist policy of domination, plunder and aggression, have generated and environment of generalized insecurity.

We must continue to mobilize against the imposition of this logic of destruction and war. Together, we pay our tribute to all victims of wars, the survivors and the martyrs of the nuclear strikes of Hiroshima, and Nagasaki and to all who continue to resist and demand the end of war and the abolition of all weapons of mass destruction. This way, we strengthen the solidarity among the peoples in the anti-imperialist struggle for peace.