A resounding anti-imperialist message that "the only hope is the struggle of the peoples" was sent by thousands of people, with a strong youth presence, who, responding to the call of the Greek Committee for International Détente and Peace (EEDYE), along with trade unions, students’ unions and mass organizations, demonstrated in front of the Israeli Embassy and then marched a long way to the US Embassy.

The very large gathering and March that followed, found a huge response from the people at every step, with constant applause from the balconies, honking from the passing drivers and while others stopped on the side of the road to take videos, to honk and salute the Palestinian people.

The demand "for the Greek government to proceed with the recognition of the Palestinian state, based on the unanimous decision of the parliament in 2015 " was expressed in his statement by the General Secretary of the KKE, D. Koutsoumbas, who attended the rally .

With the slogan "Stop the genocide of our people now," the General Union of Palestinian Students (Athens branch) was numerously present in the gathering with its banners and flags, while they were applauded by the Greek people in front of the Israeli embassy, ​​which the government had shielded with strong anti-riot police forces. There, Grigoris Anagnostou, organizational secretary of EEDYE, stated: "We denounce and condemn the government that continues to upgrade political, economic and military relations with the murder state of Israel. Solidarity with Palestine "!

The gathering started at the Ministry of Defense and was greeted by Nikos Papanastasis, Ret. Lieutenant Colonel, MP of the KKE and member of the National Council of EEDYE, who noted that "the new crime against the Palestinians by the murderous state of Israel is a crime committed with the support of the US and the EU. The Greek government and other bourgeois parties openly cover up Israel's aggression. They have a responsibility but also a contribution to this development ", emphasizing that" above all they put the US-NATO plans “.

Christos Chalkiadakis, member of the National Council of EEDYE stressed in his greetings speech:"We call on the youth of our country to condemn the crime that is widely supported by NATO, the EU and their governments. Condemn the New Democracy government, which speaks of "right to self-defense". "Condemn the hypocritical stand SYRIZA, which, as NATO's “left-wing government”, has taken off economic, political and military cooperation with Israel."

“Now is the time to intensify even more decisively the popular struggle in every workplace, in every school and university, in every neighborhood for the disengagement of Greece from imperialist plans and wars”, stressed George Lambrakis, vice president of the Greek Committee for International Recession and Peace (EEDYE) who made the keynote speech at the gathering of EEDYE at the Ministry of National Defense.

George Lambrakis, who is also son of the founder and martyr Grigoris Lambrakis who was assassinated on 22nd May 1963, stressed amongst other: “From this rally today, we condemn the new massacre of the Palestinian people by the murderous state of Israel, the attack on the Palestinian protesters, the brutal violence and repression, the airstrikes that have been going on in recent days in the Palestinian Gaza Strip with dozens dead and hundreds injured.

The recognition of Jerusalem as the capital of Israel by the United States and the "Abraham Agreements" with the Persian Gulf states, under American supervision, gave a boost to the Israeli aggression, escalating the persecution, imprisonment, deportation and extermination. The annexation of Palestinian territories in the West Bank and the deepening of the occupation in the Palestinian territories.

We denounce the criminal attitude of the US and the EU, which talk about Israel's "right to self-defense" by promoting its aggression. The responsibilities of the New Democracy government are enormous, which in essence covers the murderous operations of Israel, trying to provocatively equate the aggressor and the"victim, continuing the policy of the SYRIZA and PASOK governments and constantly upgrading the political, economic and military cooperation, military exercises and training with the murderous state of Israel.

It is a provocation against our people and the neighboring peoples and we have to give a decisive answer.

We express our solidarity and support to the Palestinian people. We support its just struggle for a free and sovereign State Palestine on the borders of 1967, and Jerusalem East as its capital. We demand that the Greek government implement the unanimous decision of the Parliament from 2015 for the recognition of an independent Palestinian State.

The huge demonstration reached the US Embassy with the slogans and demands to cancel the Greek-US military agreement, to shut down the US/NATO military bases and installations and the return of all Greek soldiers from missions abroad.

The slogan thousands of people chanted was:

NO SUBORDINATION TO IMPERIALISM! THE ONLY SUPER-POWER ARE THE PEOPLES! 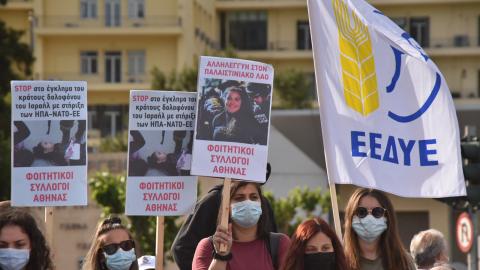 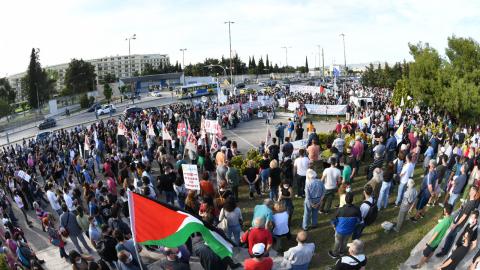 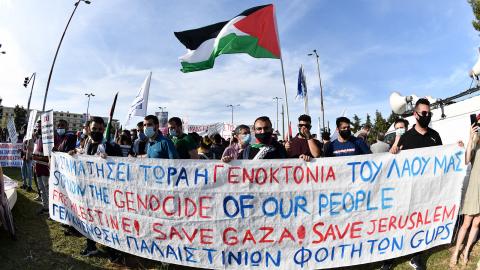 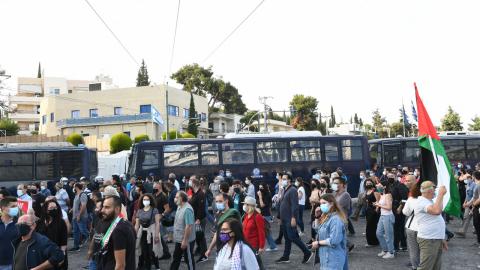 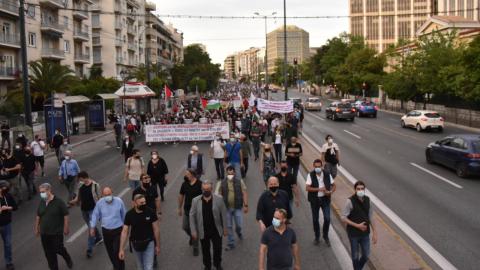 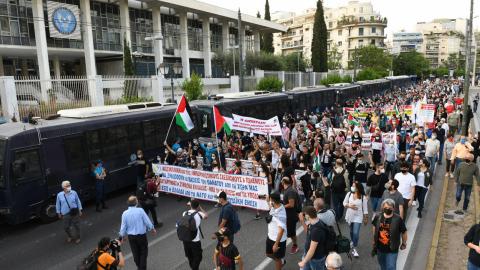 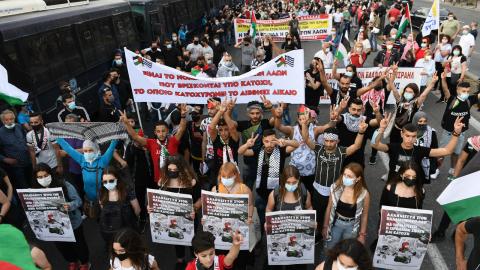 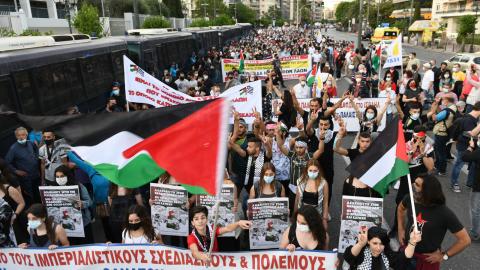 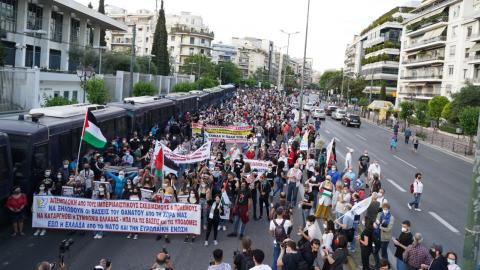 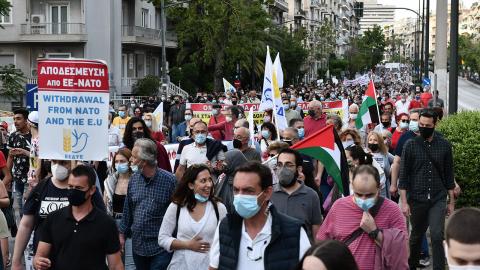 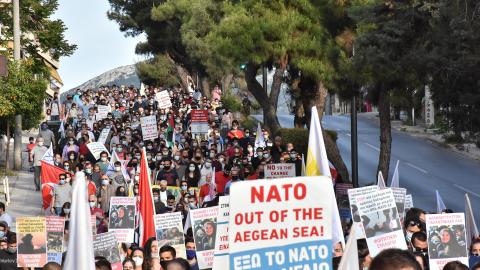