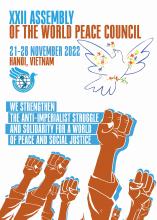 The coming 22nd Assembly of the WPC will take place In the capital of Vietnam, Hanoi, the from 21-26 November 2022. For one week, Hanoi will turn into the "world capital of the anti-imperialist struggle for peace", after 6 years of the holding of the previous conference in Sao Luis of Brazil.

The Vietnam Peace Committee, founded in 1950 with the revolutionary leader Ho Chi Minh himself as its first president, will host the World Assembly of the WPC on November 23-24 and an International Anti-Imperialist Conference will follow on November 25. The outgoing executive committee of the WPC will also meet in Hanoi, while visits will be made to historical sites and other monuments of the country. There will be separate briefings with the country's organisations and authorities such as the Patriotic Front, the Ministry of Defense and the Vietnamese Union of Friendship Organisations (VUFO). The delegates will meet the President of the Republic and the opening of the WPC Assembly will be attended by the Standing Vice President of the People’s Assembly.

Delegations from 60 or more anti-imperialist peace movements of the world and a number of invited friendly organizations are expected in Vietnam. The international anti-imperialist organizations of Trade Unions (WFTU), Youth (WFDY), Women (WIDF) and Lawyers (IADL) are also expected to take part. The Assembly will assess the actions of the WPC in the last six years and will determine the priorities for the next four years, electing its new leadership.

The Slogan of the 22nd Assembly of the WPC "WE STRENGTHEN THE ANTI-IMPIERIALIST STRUGGLE AND SOLIDARITY FOR A WORLD OF PEACE AND SOCIAL JUSTICE" captures the need and the weight that the WPC organizations attach today to the struggle of the peoples, in a world dominated by imperialism as an international system, where the peoples are faced with wars, misery and social injustice, while at the same time with the increase of profits of the monopolies and multinational corporations every day. 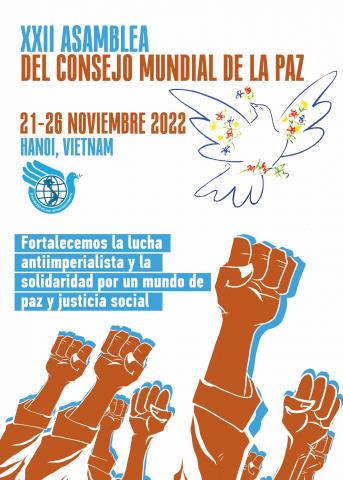