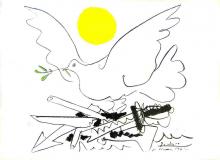 Castles of clouds gather on our collective horizon; the earth shakes under our feet.

Europe is experiencing times of crisis. A crisis that is political, financial and economical and cultural. We know how in the past these crises were "solved" through war.

But war has returned to Europe since the Balkans; the most reactionary right-wing forces win elections; the tragedy of refugees highlights Europe’s inability to respond with a joint system of protection. All over the world aggressions and military conflicts are taking place.

Meanwhile, we should have learned that war suspends in a terrible way the rights and freedoms that the European citizens have achieved. In particular, we know how the media is captured with propaganda and becomes a chain of lies that conceal the truth that lies either on this side or on that of the opponent. NATO not only does not help to solve these problems and but makes them worse.

The undersigned protest against the holding of a NATO summit in Warsaw, on July 8 and 9, and advocate peaceful means for the settlement of international disputes.