It is with great pleasure to attend on behalf of the WPC your National Conference here in Raipur, state capital of Chhattisgarh. Allow me to congratulate you all for the preparations and the conferences on States level in the course of reaching Raipur, this beautiful place which is hosting the National Conference and us all. Your conference these days will serve the exchange of views and experiences from all over the country but foremost the plans for the future actions so much needed these days.
We are proud of having AIPSO amongst the most prestigious leadership members in our Secretariat, a committed WPC member with international reputation and recognition. And you can be proud for your rich and long history, for the legacy of leaders like Romesh Chandra on National and International level.

Your Conference is taking place at a period where we observe a growing imperialist aggressiveness worldwide and in multiple forms of expression. The imperialist aggressions and threats have increased, while the US, NATO and the EU governments are increasing their military budgets in order to realize their plans in all corners of the world.
The slight recovery of the world economy in comparison to the previous 10 years is actually leading again to a new circle of capitalist economic crisis, as the indications in many industrialized capitalist countries show. The root causes of the economic crisis are the same and the victims of it again the workers, peasants youth and unemployed masses. Likewise the same are also the ones who benefit from the crisis e.g. the big capital, Multinationals and Monopolies who are increasing even in these times their profits.
At the same time we note with concern the extremely negative developments around the withdrawal of the USA from the INF agreement, which will open the ways for already existing plans of deployment of new nuclear arsenals by the US in the Balkans and Middle East, which will cause a new arms race internationally. Such developments are opposed strongly by the WPC, while we insist and strive for the global abolition of nuclear weapons and tests in the world. We can already observe the increase of the military budgets and a new arms race, weapons export with lucrative profits for the war industry worldwide.
Without underestimating other cases allow me to refer to some only areas and countries, where we have escalating negative developments.
The general situation in the Middle East continues being explosive. The situation in Syria, despite the significant victories of the Syrian people and army, remains under tension, with the recent military invasion of Turkey in the Northeastern part of the country and their plans to actually remain and de facto annex sovereign Syrian territory. The pretext of “security” is cynical and cannot hide the aims of Turkey for change of the demographic composition (against the Kurdish population) in the northern part of Syria along with the geo-strategical expansion of Turkey. The partial withdrawal of US-troops from this area opened the way for Turkey’s incursion and is accompanied openly by statements of US President D. Trump, that the USA will maintain the control of the Syrian oil in the same area. All the above constitute once more the ongoing violation of the sovereignty of Syria and of every sense of International Law. We observe with deep concern the agreements between involved parties (USA, Turkey, Russia etc.) which actually neglect the right of the Syrian people to exercise fully their sovereign rights over the land. As WPC we demand the withdrawal of the foreign military occupation forces in Syria and support the right of the Syrian people to decide alone upon their destiny and future. Likewise we express our deep concern about the recent developments in and around Libya where after the destruction and division of the country in 2011 by NATO forces, Libya is becoming the territory on which fierce competition is being carried out for the sake of the geo-strategical control and the control of the energy resources where already Turkey is sending troops and “recycled” wholly warriors from the Syrian Idlib on the side of the officially recognized Tripoli government.
A key issue continues being the struggle of the Palestinian people, which is struggling for the end of the Israeli occupation. We denounce the slaughter of Palestinian by the Israeli occupation in the Gaza Strip and West Bank, as well as expansion of the settlements and land robbing, which continue along with the Judaization of Jerusalem and the deprivation of political rights for Non-Jewish citizens in Israel. As WPC we reiterate our full support to the struggle of the Palestinian people to end the occupation and for their right to establish an independent and viable State within the borders of pre 4th June 1967 with East Jerusalem as its capital. We call upon and struggle for the recognition of such State by governments and the UN and reject the imperialist maneuvers and hypocrisy towards Palestine by equating victims and aggressors. We demand the release of all Palestinian political prisoners from Israeli jails and the right for the return of the Palestinians to their lands, according to the UN Resolution 194.

The situation in Latin America is of great concern.
The most recent Coup d’ Etat in Bolivia (10th November) against the legitimately re-elected President Evo Morales on 20th October, constitutes an open intervention of the US, its loyal mechanism of the Organisation of American States (OAS), well coordinated with the local oligarchy. We condemn the Coup and demand the respect to the expressed will of the Bolivian people. The subversive and destabilizing actions and the interference in the army and police are a repetition of what the imperialists and their allies tried in the case of Venezuela. They remind us of the darkest days in the recent history of Latin America (dictatorships, military interventions etc.) and are directly linked with the imperialist plans against Cuba, Nicaragua and other countries. The WPC expresses its deep concern with the negative developments in the region where the US administration and the EU (and its governments) are playing a major role in the support of reactionary forces and the “violent regime change”.
In Venezuela, the forces of the local oligarchy tried to overthrow the legitimately elected President of the Bolivarian Republic of Venezuela, in close cooperation with the USA, the European Union and reactionary governments of the “Lima Group” in order to take over the rich mineral resources of Venezuela. The ideological and political attack on Venezuela and Cuba is accompanied by heavy sanctions against the peoples, aiming in the asphyxiation of the peoples. Nicaragua is being targeted also with the same methods as in Bolivia and Venezuela. As WPC we expressed our strong opposition to the above plans with statements, protests and demonstrations of our member Organisations in dozens of countries. It is self-understanding to underline our sincere and deep solidarity with the other peoples in Latin America and their struggles, and against the new threats and dangers and in the framework of the new regimes in Brazil, Colombia etc.

Allow us to refer also to the developments of the region of Asia&Pacific. The US-administration is not hiding its priorities and aims to contain the emerging role of China both economically and politically. The so-called trade war is an expression of the fierce competition between US-EU- Russia, China and others on the distribution of markets and spheres of influence. The US is shifting major contingent of their Navy and Army to the region, where they maintain tens of thousands of troops and more than 200 Military Bases. Through their allies (Japan, South Korea, Australia etc.) they are building “Missile Defense Shields” and deploy rapid intervention forces in many countries. The “picture” is being completed by the “Bilateral Military Agreements” which the US has signed with almost all countries of the region, supposedly on mutual basis, having China as a main target.
On the developments on the Korean Peninsula we observe with caution the situation and support the Inter-Korean talks with the perspective of the independent and peaceful reunification of the peninsula, along with our demands for the end of the military exercises of USA-Japan and South Korea and the withdrawal of the US troops and their THAAD umbrella from the Korean soil. In this light we support the efforts for the signing of a peace accord between the DPR Korea and the USA in substitution to the armistice agreement of 1953 and the complete denuclearization of the Korean peninsula. We express our solidarity with the Korean National Peace Committee (KNPC) for their noble struggle of the reunification of their fatherland.
The WPC is following with concern the developments in the South China Sea, particularly about the territorial and maritime disputes between several neighboring countries. We support the peaceful settlement of differences bilaterally and multilaterally between all involved parties. We call upon all sides to refrain from any unilateral actions which may further complicate the situation; we reaffirm our principled position for the respect and implementation of International law, including the 1982 United Nations Convention on the Law of the Sea (UNCLOS), which guarantees the sovereign rights of all countries. We are strongly against the militarization of the area as well as the military presence and actions of non-regional powers, notably the US, which has clearly its own motives and interests. We demand their withdrawal from the region and call upon all sides to de-escalate militarily the situation.
A matter of serious concern are the more than one million Rohingya refugees in Bangladesh, which constitute a humanitarian crisis which has to be dealt by the International community and the UN with adequate humanitarian help and with respect to their rights to decent life and repatriation to their homes with civil and political rights. At the same time we object any efforts to instrumantalize the crisis for religious purpose and geostrategical aims by imperialist forces and their allies.
The WPC expresses its serious concern about the growing religious strive and fundamentalism in South Asia which are used to divide the peoples’ struggles. We call upon the social organizations to be alerted about this explosive situation and to mobilize against such divisive agenda and the growing nationalist tendencies as it was observed recently with the War rhetoric between India and Pakistan.
We observe with deep concern the increasing alignment of the government of India with the imperialist plans in the region and in particular its joint military naval exercises with the US-Japan-Australia in the Pacific Ocean with the clear plan to contain China. Likewise we are troubled with the increase of the military budget of India by 3.1% bringing the country 4th biggest military spender after USA, China and Saudi Arabia in absolute figures.
Allow me here to refer to an extremely serious issue related to the decision of the Indian government about the “Citizen Amendment Act”. We share your concerns and opposition regarding the dangers and the change of the secular character of the Indian State and its Constitution. The categorization of citizens by religion and beliefs helps only the manipulation of masses and the distraction from the real social problems; it constitutes a reactionary approach and practice which will further escalate tensions in society.

With these thoughts we express our solidarity with your struggle in India and wish you fruitful deliberations in your Conference for the benefit of the people of India and its peace movement. 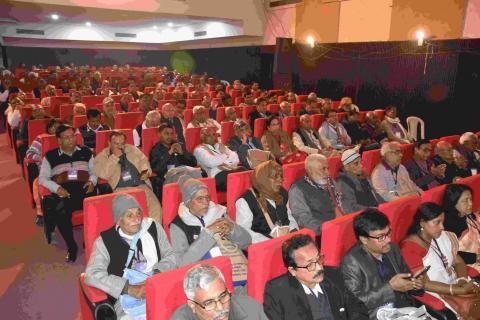 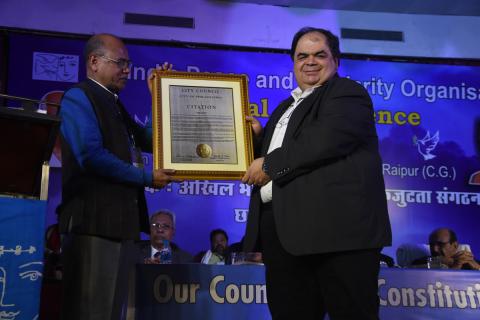 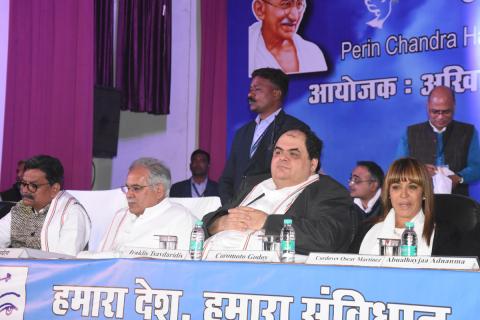 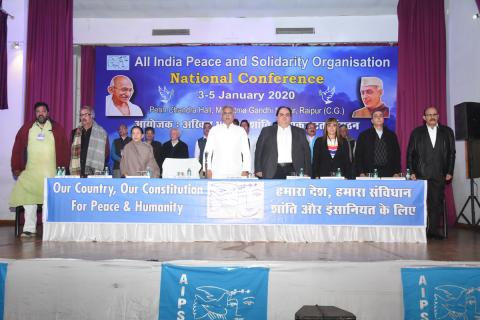 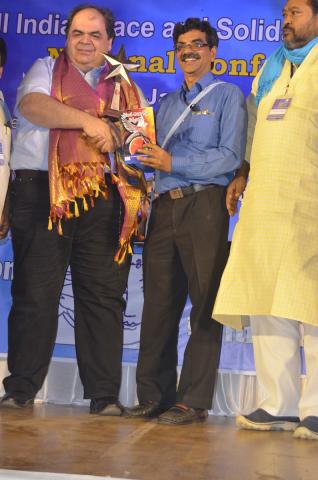 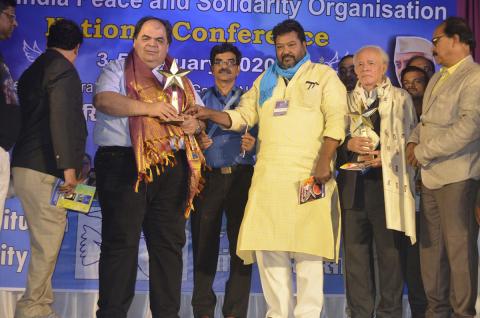