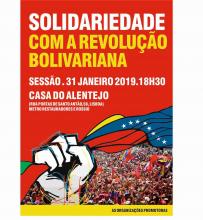 The Portuguese Council for Peace and Cooperation (CPPC), given the serious threats agains the Bolivarian Republic of Venezuela, divulges two recent statements by CPPC and the posters of two forthcoming solidarity initiatives, to be held in Lisbon and Porto, promoted by CPPC alongside other Portuguese organizations. This initiatives in "Solidarity with the Bolivarian Revolution" are called by stating that "At a time when a new coup d'état is promoted by Trump, with the support of Bolsonaro and other subservient to them, it is indispensable to express solidarity with the Bolivarian Republic of Venezuela and the Venezuelan people. This coup is part of the escalation of disinformation, destabilization, pressure, blackmail, economic and financial blockade promoted by the Trump Administration, which is at the root of the aggravation of the problems and difficulties faced by the Venezuelan people, and the Portuguese community in Venezuela. It is recalled that the US has been wielding the threat of an intervention against Venezuela - following the path of aggression against Iraq, Libya or Syria. The Portuguese Council for Peace and Cooperation (CPPC) and other Portuguese organizations, in solidarity with the Venezuelan people and defending their legitimate right to decide sovereignly on their path of development - a right enshrined in the Charter of the United Nations and in International Law – call to the participation in the solidarity sessions."

The Portuguese Council for Peace and Cooperation (CPPC) defends the legitimate right of peoples to sovereignly decide their course of development - a right enshrined in the Charter of the United Nations and in international law - a position that is important to reaffirm at the moment when open and blatant threat, pressure, blackmail, blockade and interference on the Bolivarian Republic of Venezuela intensifies, which aims to attack and aggravate the living conditions of the Venezuelan people.

The non-recognition of the democratically elected President of Venezuela, Nicolás Maduro, is another episode in the long process of interference and destabilization promoted and carried out by the United States of America and the Venezuelan oligarchy, which has lasted for 20 years, as many as the Bolivarian Revolution - the coup against President Hugo Chávez in 2002, the sabotage of state oil company PDVSA, terrorism, blockade and economic and diplomatic sanctions were and are methods used to hamper action and, if possible, overturn the Bolivarian power and the country's legitimate institutions, which have been democratically elected over 20 years.

In the 25 electoral acts held in Venezuela in the last two decades, the Bolivarian forces won 23 and the opposition 2. In the presidential elections of May last year, the putschist opposition - disunited and politically defeated -, following US guidelines, rejected the Venezuelan government's dialogue efforts in the negotiations that took place in the Dominican Republic, decided not to present any candidates and tried to remove others from appearing, seeking to withdraw legitimacy from the electoral act, which they did not achieve. The victory obtained by Nicolás Maduro had a great meaning. It should be noted that the transparency and reliability of the Venezuelan electoral system is evidenced by international institutions such as the Carter Institute, led by former US President James Carter.

What the US Administration and the Venezuelan oligarchy do not condone, accompanied by a chorus of governments subservient to the interests of the United States - like the majority of the so-called 'Lima Group' - is not any lack of democratic legitimacy of the elected President of the Bolivarian Republic of Venezuela, or alleged violations of human rights and democracy. As evidenced by the brutal reality imposed on countries attacked by the United States and its allies, these are only the old and scrawny 'arguments' they use to hide the destabilizing operations they promote to try to overthrow the legitimate Government of Venezuela, calling into question the peace and security of the Venezuelan people, including the large Portuguese community living in this country.

Bearing in mind the great challenges and problems facing the Bolivarian Revolution and the Venezuelan people, we must not forget the profound transformations that have taken place in Venezuela for nearly 20 years, which, despite blockades and interference of all kinds, reached 2, 5 million resettled families, the eradication of illiteracy, one of the highest university attendance rates in the world, advances in health, recognition of the rights of indigenous peoples, a widely participated democratic regime.

Faced with the boycott and the imposition of a strong economic and financial blockade, in the face of the attempts for Venezuelan political and diplomatic isolation, aimed at damaging the economy of this country and undermining the living conditions of the Venezuelan people, those who defend peace and the right of each people to define their futures free from external interference, can only demand the end of the boycott and the economic blockade, because it is their end that serves the interests of the Venezuelan people and the Portuguese community living in Venezuela.

Faced with the threat of military intervention, destabilization, all the immense external aggression of which the Bolivarian Republic of Venezuela and its people are victims, those who defend the peace and the right of each people to define, free of external interference, their future , can only be in solidarity with the Bolivarian Revolution and the Venezuelan people fighting for their sovereignty, their right to development and social progress.

No to interference and threats against Venezuela

The Portuguese Council for Peace and Cooperation (CPPC) repudiates the interferences and threats developed against the Bolivarian Republic of Venezuela and the Venezuelan people surrounded the swearing-in of President Nicolás Maduro, held today.
The US economic, financial, and commercial blockade was joined by unacceptable declarations and measures by countries of the so-called 'Lima Group', together with the European Union, who affirm to not recognize the legitimacy of the election results of May 20th 2018, which gave an ample support to the reelection of Nicolás Maduro, against part of the opposition totally compromised not only with the interests but the orders of the USA.
CPPC repudiates the position of the Portuguese Government, in line with the EU, and considers it particularly grave. A position directly opposed to the interests of the Portuguese people, including the numerous Portuguese community residing in that South American country.
When those who are among the most responsible for the difficulties faced by the economic situation in Venezuela seek to take advantage to question the Bolivarian Revolution and the legitimate Government of this country, CPPC recalls that the US blockade and the economic sanctions imposed on Venezuela and its people are the cause of its most serious problems —which among other serious aspects, cause the funds derived for the sale of oil to be retained in the buyer countries.
Despite all the problems and obstacles faced over the last 20 years —after the first electoral victory of Hugo Chávez in 1998—, Venezuela has achieved remarkable progress benefiting the population, particularly the poor, including: 2.5 million people rehoused; eradication of illiteracy; one of the highest university attendance rates in the world; advancements in healthcare; recognition of the rights of indigenous peoples. Also valuable is contribution it gave and gives to cooperation among Latin American and Caribbean States, in the framework of equality of rights and respect for national sovereignty.
CPPC expresses its solidarity with the sister organization Committee for International Solidarity, of Venezuela, and appeals to all lovers of peace to express solidarity with the Venezuelan people and its Bolivarian Revolution. 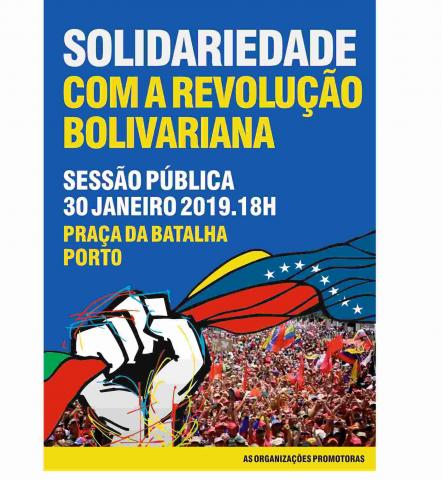