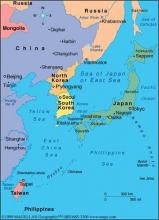 The Portuguese Council for Peace and Cooperation (CPPC) alerts to the gravity of the situation in the Korean Peninsula, following the reinforcement of the US presence and the intensification of its military pressure against the Democratic Popular Republic of Korea (DPRK), and to the unpredictable and dramatic consequences of a military escalation in this region.

After the recent direct military attack against Syria and the use of a high-power bomb in a remote area of Afghanistan, the increase of US military means and forces in the Korean Peninsula ​– with the installation of new missile systems and the presence of a naval fleet ​– and the US threats of military aggression upon DPRK represent a new and dangerous step for peace and security, not only in the region, but in the world.

Once again, the pretext of the US for an increase in threats of a military attack- upon the DPRK is lacking, for long before the beginning of the Korean nuclear program, the US had already placed this country in George W Bush's infamous «axis of evil» ​– of which the US has already attacked Iraq, Libya and Syria ​– and have for long held large-scale military exercises together with the Republic of Korea and Japan, simulated attacks upon the DPRK.

Recall that North Korea was massacred by US bombs between 1950 and 1953, when they were forced to sign and armistice, still in place, maintaining thousands of US troops in the south of the Peninsula since then, dividing Korea along the 38th parallel.

​As CPPC has affirmed for long, it makes no sense to speak of the just objective of denuclearizing the Korean peninsula, or the world, unilaterally, pointing only towards one of the parts. Specifically, one can not exclude from this demand the country that possesses the largest nuclear arsenal in the world, that promotes its modernization and installation outside its territory and affirms in its military doctrine the possibility of a nuclear first strike: the United States of America, that maintains a military contingent of dozens of thousand men in South Korean, possess nuclear weapons and naval fleets spread worldwide, and are capable of using them upon place on the globe in a short time period.

Only by manifest hypocrisy can the US unilaterally demand anything in terms of denuclearization. What truly serves the cause of peace and security in the world is the necessary general, simultaneous and controlled dismantlement of all nuclear arsenals in the world.

​But in that region of the ​globe, that objective must be accompanied by other measures that give real guarantees to the DPRK​ that it will not be the target of US military aggression. What is necessary is the creation of conditions for the Korean people, without foreign interference and pressure, to unify their homeland, divided for too long, for reasons that are totally alien to them. That legitimate aspiration will not be possible to achieve without the end of the military escalation and the US threats of aggression against the DPRK, which CPPC condemns.

​CPPC appeals to the expression of demands for peace, the end of military escalation and the resolution of the conflict by peaceful means, within the framework of the Principles of the United Nation Charter.​