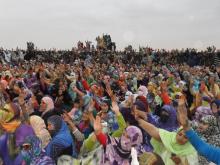 Given the announced continuation, in Rabat, Morocco, on June 5th, of the trial of a group of Sahrawi prisoners in Moroccan prisons — known as the Gdeim Izik group —, the Portuguese Council for Peace and Cooperation (CPPC) reaffirms its repudiation for this political trial, the demand for the release of these activists and its solidarity with the Sahrawi people.

We recall that the process by the authorities of the Kingdom of Morocco against this group dates to the events of November 2010, when thousands of Sahrawis residing in Western Sahara, illegally occupied by Morocco, decided to establish a camp in Gdeim Izik, 15 kilometers from El Asiún, as a means of struggle for the respect of the human rights of the Sahrawi people by Morocco, the occupying force.

The Moroccan army and police invaded and violently repressed the camp. Many Sahrawi activists were arrested. Among them, 24 were accused of having organized the demonstration, having been subject to ill treatment and abuse by the Moroccan authorities. After 3 years in prison, they were condemned in a military court on February 2013, in a trial denounced and considered null by several international entities, including the report of the working group for arbitrary detentions of the United Nations and the decision of the UN Committee against Torture of December 2016. After large international pressure, this trial was annulled by the Supreme Court of Justice of Morocco.

In march of this year, in solidarity with the Sahrawi political prisoners in Moroccan prisons, CPPC sent letters to the UN General Secretary, António Gueterres, and the Vice-President of the European Commission and High Representative of the European Union for Foreign Affairs and Security Policy, Frederica Mogherini.

The demonstrated and persistent refusal by the authorities of the Kingdom of Morocco to respect the rights of the Sahrawi political prisoners and the UN conventions are a motive of great concern for CPPC and deserve clear condemnation.

CPPC reaffirms its solidarity with the just cause of the Sahrawi people for their right to self-determination and independence, and for their demand that the Kingdom of Morocco, the occupying force, fulfill the UN decisions.