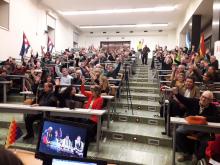 Saturday 16st November 2019, a assembly with a good number of participants was held at the State University of Milan, organized by the Committee Against Milan War with the collective "Milan en revolucion", member to the Movimiento Revolucion Ciudadana.

With our guest Pino Arlacchi, ex vice secretary of the UN Assembly and today advisor to the government of the Bolivarian Republic of Venezuela, the political, economic and social situation of the Latin American and Caribbean countries was discussed.

The inability of the lackey countries of Western imperialism to be governed by a broad popular consensus was highlighted, due to the liberalist prescriptions imposed by the International Monetary Fund and the World Bank aimed at controlling and robbing by transnational corporations of natural resorces present in the continent. Prescriptions that tend to concentrate wealth in the oligarchy’s hands, so in a growing impoverishment of the middle class, workers and the less well-off.

For these reasons, imperialism is no longer able to win its puppets in electoral competitions with the rules of liberal bourgeois democracy, and must resort, even in key countries like Brazil and Argentina, to the judicial persecution of heads of state such as Dilma Roussef, Inacio Lula Da Silva and Cristina Fernandez de Kirchner, and to velvety coups d’état as in Honduras and Paraguay; however, fierce repressions do not disappear that are so reminiscent of the darkest years of fascist dictatorships (70s and 80s).

Norma Espinel was with us, mother of Jorge Glas, vice president of Ecuador, now a political prisoner, who, having been delegated by President Rafael Correa to the Ministry of Strategic Sectors, made the country more advanced through fiber optics, as well as with works important that provide sustainable energy. Our Normita spoke so touching of the injustice being carried out against her son and of the inhumanity shown by these puppet regimes. During the initiative and in the subsequent financing dinner, funds were collected to support the legal expenses of the Glas’ family, to which all our support and solidarity goes. The fault of Glas was to put aside USA interests, putting instead those of Ecuador at the top of the priorities, aiming at the sovereignty and freedom of the Homeland.

Last October the Ecuadorian people rose up against the anti-people policies of the president Lenin Moreno, corrupt and bent to the wishes of the United States. Struggles repressed in the blood and that only for the moment have subsided, due to the agreement between the leaders of the Confederation of Indigenous Nationalities of Ecuador (CONAIE) and the government. Agreement for the withdrawal of the so-called "paquetazo" remained on the paper, which saw at the negotiating table neither the trade unions, nor the politically strongest opposition in the country, represented by the Revolucion Ciudadana movement of the former progressive president,Rafael Correa. They too were among the protagonists of this struggle. An agreement that does not put an end to political persecution against the leaders and militants of the Revolucion Ciudadana, and that will also go against the indigenous nationality base, they too victims by the fierce police and military repression. All in total censorship and with the connivance of the Western mass media system. We also had the honor of having with us in a Skype connection, the former foreign minister of the Correa government, Guillermo Long, who pointed out that he is trying to bring South America back to the darkest years of the military dictatorships of the 70s and 80.

Thus the Assembly expressed with a vote almost unanimously a document of solidarity to Jorge Glas, to the Ecuadorian political prisoners and to those who are fighting against imperialism for emancipation, social justice, the sovereignty and freedom of Ecuador.
https://www.youtube.com/watch?v=sxjiLrBj1mw

During the assembly all our solidarity was also expressed to the Chilean people, who had been fighting for about a month. Discussions were made on what is happening in Chile with Gabriela Toro, spokeswoman for the Comisión de Solidaridad with Chile, in a Skype connection from Genova. There was talk of the mobilizations in Chile, where it has now come to ask for the resignation of the heir of Augusto Pinochet, Sebastian Pinera, and the launch of a new constituent assembly that sweeps away the constitution imposed on the Andean country by the fascist general. A people, the Chilean one, who are paying with blood for sovereignty, independence and greater social justice: hunger pensions provided by private funds, low wages, costs inaccessible to education and health, services strictly in the hands of private.

At this point it is introduced the important issue of Julian Assange, whose arrest was inspired by the United States of America. After imprisoned Jorge Glas, Lenin Moreno has removed the political asylum to Julian Assange, who lived from political refugee in the embassy of Ecuador in London. It is foretold that in the municipal council of Milan will be discussed a motion in defense of freedom of information and in solidarity with this journalist, whose revelations have contributed to show the true face of U.S. foreign policy and its extension of war. This theme was also touched by Pino Arlacchi, who calls each of us to the awareness of not being minority or quixotic: in the world we are the majority.
https://youtu.be/syQ47SCfL4g?t=1633

It was reasoned about the situation of the Plurinational Republic of Bolivia, which since November 10st is the victim of a coup d‘état with a strong repression that has already left almost 30 dead on the field, with the censorship made by the mass-media apparatus and the representation of the events that are spread: in essence, the evidence of the coup d’étata is denied and they narrate the tale of a country in revolt against Evo Morales, that he is accused of being an authoritarian president, eager for power, who basically he deserves to be in exile in Mexico. It was emphasized that this is also the representation that makes it a radio that calls itself "Leftist", Radio Popolare, which like other political organizations that continue to call themselves “left” and which in Italy stand as champions of human rights against "all fascisms and racisms ", when it comes to taking sides with the imperialism of the US and the EU, first they wonder whether it is a coup or not and, as for example in Ukraine and Bolivia, they pretend not to see that the coup d’état of Maidan Square in Kiev, like the Bolivian one have a common and dramatically visible Nazi tract. As amply demonstrated, the United States makes extensive use of jihadist forces in North Africa and the Middle East, Nazi-fascist and Banderist forces from South America to the heart of Europe to reach its targets of destabilizing against the countries considered enemies.

Imperialism has not forgiven Evo Morales for having nationalized the country's strategic resources (gas, gold, tin) and for not wanting to give away the to Western transnationals the lithium(the black gold of the future, which will power electric cars and smartphones ), of which Bolivia is the first world reserve. While the Bolivian oligarchy has never accepted being governed by the indigenous Evo, who has halved the poverty of the Bolivian people in 13 years of government, has halved illiteracy, increased life expectancy, led a levels to German Western unemployment, having an annual economic growth rate among the top places in the world.

Finally, we focused on Venezuela. The country which, according to the mass-media, has been ruled for over 20 years by two "dictators": Hugo Chavez before, Nicolas Maduro today. Same script: when a country decides not to submit to Washington's orders, but wants to manage its own resources and cherish its sovereignty and independence, the accusations of electoral fraud and authoritarianism are unleashed, fascist and paramilitary violent bands are unleashed , every attempt is made to subvert the democratic order, coups d’état are attempted and a puppet is recognized, Juan Guidò, self-proclaimed president in a square in Caracas. But the USA detest so much Venezuela, because it is the country that more than others has gone against it in all areas of international politics, and it is the country that, since the victory of Hugo Chavez in 1998, has worked and is working so that the dollar is no longer the reference currency for international trade. This would mark the end of their global financial power. The Venezuelan people have resisted for over 20 years, it is since 2014 (under the Obama presidency, exacerbated by the Trump administration) that the country is the victim of US / EU sanctions and of a criminal commercial and financial blockade that prevents it even financial transactions for to be able to buy basic necessities and medicines. A country that has not yet developed all the antibodies to deal with sanctions, as shown for example by the revolutionary Cuba that has resisted for 60 years and will continue to resist.

As happened in Iraq, Libya and Syria, although the United States remains the only super power in the world from a military point of view, even in Latin America they will not be able to achieve all their targets. The will of the Latin American peoples to free themselves from the shackles that their cumbersome neighbor would impose is too strong. It is a struggle that is costing deaths, injuries and thousands of arrests, but imperialism will not win it.

P.S. We put a note in the margin of this report. We can formulate what could be called a 'NOTICE TO MARINERS". On the ground of this debate are also dangers to which it is necessary to ask a certain attention is now clear how well behind many NGOS, who declare that they deal with human rights, will hide the usual United States of America. This is an element that one must learn to underestimate, almost always this news is nothing but one of the many means by which American imperialism is starting. 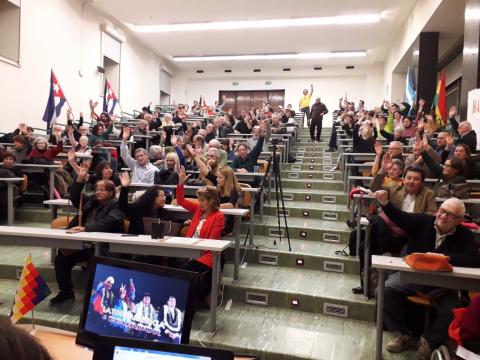 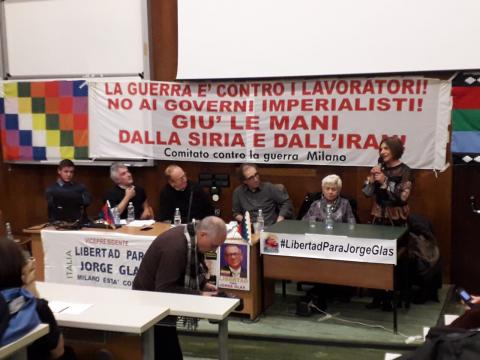 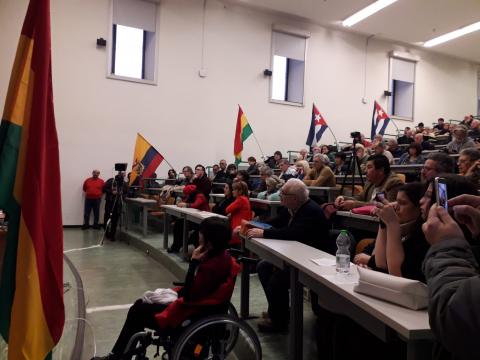 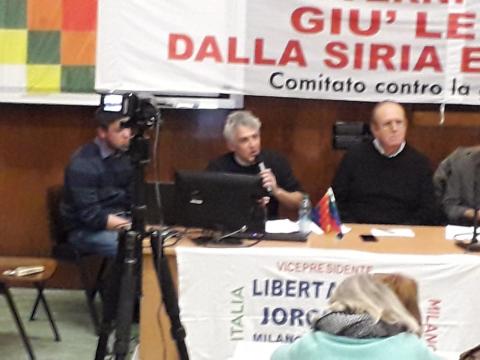 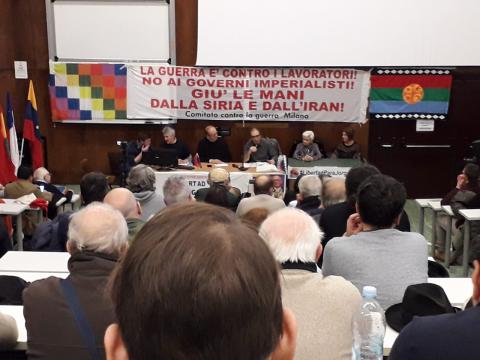 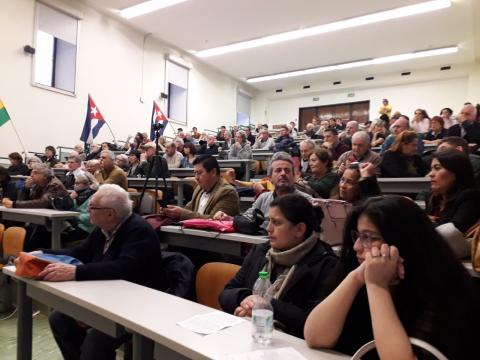 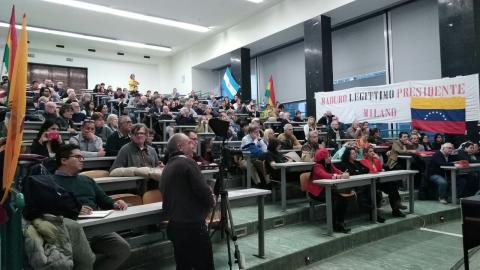