The International Mission in Solidarity with the Syrian people and Youth was held successfully by the World Peace Council (WPC) and the World Federation of Democratic Youth (WFDY) from 29-31 October in the Syrian capital Damascus. More than 90 delegates from 55 Youth and Peace Structures coming from 37 countries, participated in the mission expressing their full-hearted solidarity with the Syrian people. The solidarity mission was headed from WPC side by Socorro Gomes President, Thanassis Pafilis General Secretary and Iraklis Tsavdaridis, Executive Secretary WPC and from WFDY side by Iakovos Tofari, President WFDY and Yusdayqi Larduet Lopez General Secretary WFDY respectively.

During the 3 days of stay, important meetings took place such as with the Assistant General Secretary of the Arab Socialist Baath party Hilal Hilal, with the President of the National Union of Syrian Students Ammar Saati, with the Syrian Foreign Minister and deputy Prime Minister Walid Al Muallem, with the President of the Syrian Parliament Hammouda Sabbagh, with the Rector of the University of Damascus, with the President of the General Federation of Trade Unions (GFTU), Jamal al-Qadiri and with the Minister of Tourism Bishr Riyad Yazigi. The international delegates of the solidarity mission were received by the President of the Syrian Arab Republic Dr. Baschar Al Assad on the 31st October, while a massive Conference in solidarity with the Syrian People, Students and Youth took place at Damascus University on 30th October. The Participants of the Mission has also the opportunity to meet with the General Secretary of the Syrian Communist party Ammar Bagdache and the General Secretary of the Syrian Communist Party (Unified) Hanin Nimir.
All Syrian representatives thanked WPC and WFDY for their principled positions in support of the truth and for their solidarity with the Syrian people. They explained and described the consequences of the war imposed for more than 7 years by powerful imperialist forces and terrorist groups from more than 86 nations and denounced the role of neighbor countries and reactionary Gulf monarchies that supported the armed mercenaries by all means. The representatives of the Syrian government and institutions reiterated their will and intention to liberate fully the Syrian territory from foreign troops and armed extremists in Idlib, in the North and East of the Euphrates River.
The International Conference in Solidarity with the People, Youth and Students of Syria was attended by 400 Students and the representatives of Political parties and organisations of Syria. The conference was addressed by the Presidents of WFDY Iacovos Tofari and of WPC Socorro Gomes, while more than 25 speakers from Youth and Peace Movement from respective number of countries had the opportunity to express their greetings and solidarity. Arsheed Sayasneh on behalf of the National Union of Syrian Students, thanked all delegates and participants for the support to the struggle of the Syrian people.
Socorro Gomes and Iacovos Tofari expressed on several occasions of the mission the support of the two international organisations to the brave Syrian people and congratulated the Syrian side for the significant victories so far, wishing and expressing the support for the complete victory and reestablishment of the sovereignty and territorial integrity of the country. The two Presidents of WPC and WFDY denounced the imperialist interference and sanctions by the USA and EU on Syria, as an act aiming at strangling the Syrian people. They saluted the brave stand and victories of the Syrian army and wished for soon complete liberation of all occupied territories.
Thanassis Pafilis, General Secretary of WPC in his intervention at the meeting with the President of the Parliament Hammouda Sabbagh, underlined the solidarity of the WPC and its members and denounced the multifaceted imperialist attack against Syria who has resisted successfully with its people and army. Pafilis underlined that Syria constitutes an example for the peoples of the world that the enemy of peace is not invincible. Iraklis Tsavdaridis Executive Secretary WPC expressed towards the Foreign Minister of Syria the strong rejection of the double moral of the Imperialists in the UN and other international fora, where the imperialists are trying to use false pretexts in order to attack Syria and its people as it has happened before in Yugoslavia, Iraq, Libya and Yemen.
The President of the Syrian Arab Republic Baschar Al Assad, who received personally and welcomed all international delegates of the mission, addressed them by appreciating the role of WPC and WFDY as international organisations committed to the truth and to the noble ideals of peace and friendship of the peoples. The President considered that the weight of the World Peace Council and the World Federation of Democratic Youth lies in their adherence to their principles in defending truth and embodying the principle of peace at a time when international policies are built on lies and deception. The Syrian President indicated that the world needs these organizations especially amid attempts by some superpowers to turn international organizations into tools to strike stability and push for destruction instead of exerting efforts to consolidate peace and stability in the world. Baschar Al Assad said before closing: “Syria, which paid a heavy price to preserve the homeland and independent decision, is thankful for your solidarity”.
The International Solidarity Mission concluded with the Press Conference held on 31st October where after the introductions of the Presidents of WPC and WFDY the Resolution in Solidarity with the People and Youth of Syria was presented by the Executive Secretary of the WPC.

Upon the initiative of the World Federation of Democratic Youth (WFDY) and the World Peace Council (WPC), 92 representatives of members and friends of WPC and WFDY gathered in the Syrian capital Damascus for a mission of Solidarity with the Syrian people and Youth from 29-31 October 2018. The participants of the mission representing 55 Organisations from 37 countries held on 30th October an International Conference at Damascus University with the attendance of 400 Syrian Youth and Students and concluded with the following resolution:
We salute the brave people, youth and students of Syria and express our full-hearted solidarity for the suffering and hardships of the more than 7 years, during which Syria faced an unprecedented and coordinated imperialist aggression, carried out by the USA, NATO, the EU, along with Turkey, the Zionist state of Israel and the reactionary Gulf monarchies, having thousands of armed extremist mercenaries as tools for the destruction and devastation of the country.
We express our sympathy for the families of the thousands of victims which lost their lives and for the many more injured. We denounce the imperialist interference, the sanctions and maneuvers aiming at strangling the Syrian people by terrorist actions, using false pretexts and fake news in order to reach the desired goal to control energy resources, pipelines and markets for the sake of the profits of multinational corporations. In their strive to secure spheres of influence the imperialists and their allies used all types of machinations and actions which led to massive displacement of people in the interior of the country as well to all neighbor countries.
We express our support to the Syrian people, its leadership and army and we note with anger that despite the important victories achieved, thousands of armed fundamentalist terrorists are still on Syrian soil, as it is the case with the Syrian province of Idlib. We condemn the invasion and occupation of the northern part of Syria by Turkish troops as well as the presence of US and NATO troops in the area East of the Euphrates and their military Base at Al Tanaaf near the borders between Syria, Jordan and Iraq. We denounce the plans and actions of the imperialists for the destabilization and division of the country, in violation of every sense of International Law.
The participants of the solidarity mission acknowledge with satisfaction the to great extend return to the normal life for the Syrian people and youth after the defeat of ISIS and other terrorist groups and underline the demand that the Syrian people is the only responsible and entitled to decide upon its future and destiny, with sovereignty and territorial integrity.
We express our deep respect for the steadfastness and for the firm resistance of the Syrian people and army under which several cities and areas were liberated and are looking forward to the complete liberation of the country, including the Golan Heights. The plan for violent “regime change” failed thanks to the unity of the Syrian people, but the subversive plans have not stopped. We denounce the plans for new planned provocations under the pretext of the use of chemical or other weapons of mass destructions, which have never been proved.
The Youth, Students and Peace organisations from all corners of the world with the millions of people we are representing in our countries are declaring our unwavering support to the National Union of Syrian Students and to the Syrian Movement of Peace Partisans and our commitment to the struggle of the Syrian people till its final and complete victory.
The example of the heroic people of Syria shows clearly that no matter how strong and powerful the imperialist enemy may appear and act, it is not invincible. The Syrian people and their struggle constitute an example and source of inspiration for the peoples fighting for their just causes, for a world of peace and social justice, free from imperialist domination and exploitation. 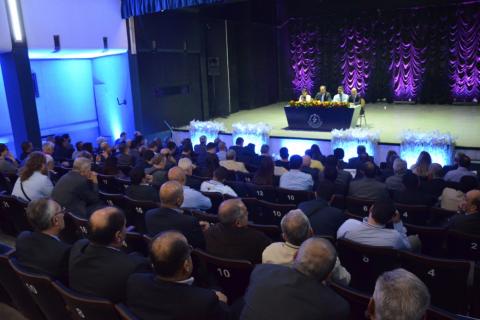 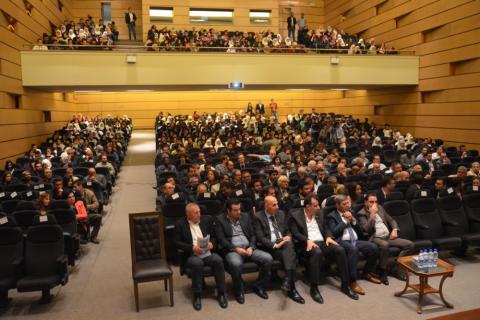 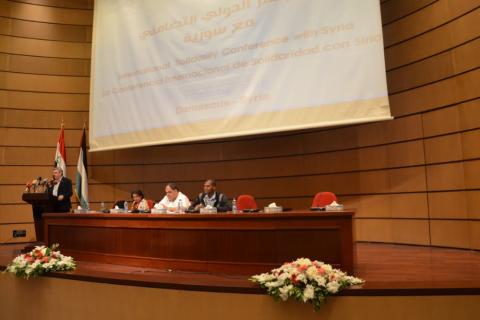 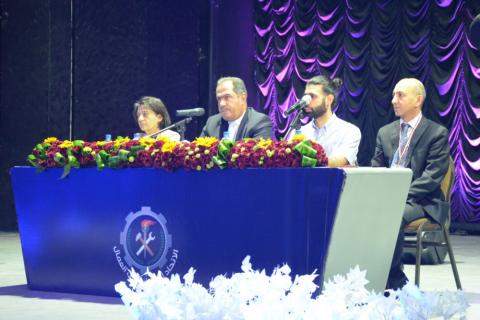 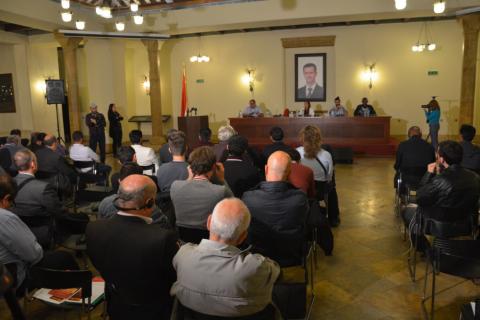 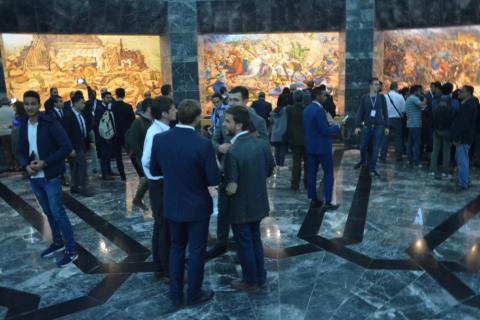 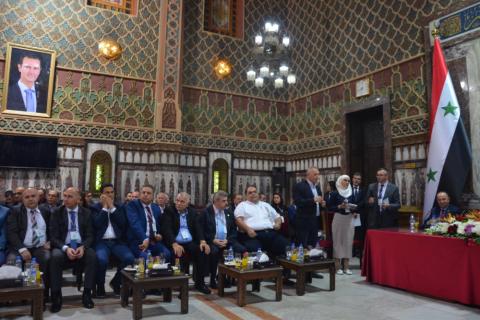 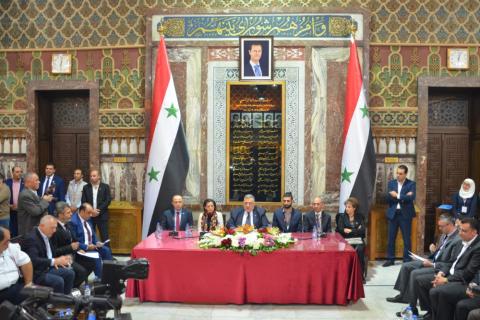