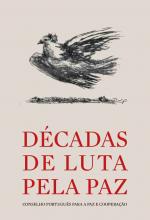 The Portuguese Council for Peace and Cooperation (CPPC) marked the 40th anniversary since it legal constitution, formalized in April 1976, with a number of initiatives, including the publication of a book from which we reproduce excerpts from its preface and introduction.
Preface
The present relevance of the struggle for peace
The complex and dangerous evolution of the international situation over the last years demonstrates that continued importance of the defence of peace, détente of international relations, of disarmament, safety, and cooperation and friendship among the peoples of the world, as well as solidarity with the peoples in struggle for their rights, through the mobilization of all those who consider peace a fundamental and pressing cause – in harmony with the principles of the United Nations Charter and, in the case of Portugal and the Portuguese people, also the fulfilment of the Portuguese Constitution.
The Portuguese Council for Peace and Cooperation (CPPC), heir of the peace movement during the struggle against fascism and colonialism, is is guided by important principles and universal values, achieved with the April Revolution, and enshrined in its Statutes, on the 24th of April 1976, when it was formally legalized, and since then always present in its action.
The world today presents increased demands for the defence of general, simultaneous and controlled disarmament, for prohibiting all weapons of mass destruction, for ceasing the arms race, for abolishing military bases on foreign soil and dissolving political-military blocks. Therefore, it is increasing important to learn about significant aspects of history and the experience of the peace movement's struggle in Portugal, its antecedents and the contributions CPPC gave and continues to give through its intervention for the achievement of those pressing objectives.
This publication is the culmination of dedicated and generous collective work of collecting and treating information, which illustrates and documents the intervention of a vast number of men and women that over decades committed to the defence of a just and fair world of peace, refusing the interference into the internal affairs of each State, defending the elimination of all forms of colonialism, as well as all forms of oppression and discrimination, demanding the respect for the right to self-determination of peoples, the right to freely choose their political, economic and social regime, for human rights, for the sovereignty and independence of States and the peaceful resolution of international conflicts.
​CPPC now possess an additional valuable tool for its activities to mobilize public opinion towards the defence of peace, namely the promotion of education for peace and of a culture of peace, seeking a wider convergence in the action of all peace loving people, developing solidarity among the Portuguese people and other peoples in struggle for sovereignty, democracy and social progress, promoting actions in favour of an independent and active foreign policy, of cooperation and friendship among all peoples, of collective security and disarmament all over the world, acting in collaboration with all national and international movements, structures and institutions that defend peace, and in close cooperation with the World Peace Council, of which it is an active member, towards the reinforcement of global public opinion for peace. (...)
​Ilda Figueiredo
President of the National Leadership of the CPPC

Introduction
The goal of this book is not to write the history of the peace movement in Portugal, nor of the CPPC. Its aims are significantly more modest, but no less important: illustrate and document the intervention of a vast number of men and women who, generously, met in defence of a just and peaceful world and who bravely took a stand against militarization, aggression, oppression and subjugation that have marked the last decades.
The information, documentation and iconography about this movement combined in this work reveal the main lines of the history of CPPC, its origin and antecedents, its principles and causes, its strategies and forms of intervention, campaigns and activities, and the protagonists and allies (...)
The first chapter – History, Causes and Principles – traces the antecedents of CPPC that finds its origins in the opposition to the resurgence of international tension after the victory over Nazi-fascism and eagerly awaited perspectives of a lasting peace. (...)
This book highlights the national expression of a movement that, since 1949-50, all over the world, united around the World Peace Council. Before World War One there were already those who fought against the more than certain conflict. In the 1930s, faced with the rise of fascism and the beginning of the Civil War in Spain, there arose a new wave of actions for peace, intimately tied to the struggle for peace for freedom and democracy that deeply marked Europe.
This chapter also underlines the principles of CPPC, throughout its continuity and evolution, the multiple expressions of its activity and intervention, and its efforts to promote its values and causes – inspired in the United Nations Charter, the Final Act of the Conference on Security and Cooperation in Europe and the Portuguese Constitution – to wide sectors of the Portuguese society. The long-standing ties of Portugal in the World Peace Council, and vice-versa, is another aspect present in the first chapter.
The three following chapters are organized around the main causes that moved and move the CPPC activists: solidarity and cooperation with peoples throughout the world; the defence of peace and action against war; the demand for disarmament and safeguarding global security. (...)
The second chapter, Solidarity and Cooperation, illustrates CPPC's action and that of other organizations committed to supporting peoples struggling for national and social emancipation, their aspirations and movements for progress and sovereignty, free from oppression and interference of any type. (...)
Peace and Solidarity, the third chapter, illustrates the reflections and initiatives against concrete military aggressions, documenting the arguments used and different expressions of the struggle against war and for peace. In this case, the dimension of the different actions and breadth achieved varied. In both cases, CPPC was a courageous voice in defence of peace and sovereignty.
In the forth and last chapter, Security and Disarmament are highlighted based on the action of CPPC and its allies against nuclear weapons and other weapons of mass destruction, militarism, political-military blocks and foreign military bases, founding and prevailing themes of the world peace movement throughout not only the last 40 years, but since the first steps given by the Portuguese peace activists. In this context, there were also large convergent actions.
(...) Therefore, the text has numerous examples of movements transversal to these causes, which are covered in a single chapter to provide coherence and clarity. Palestine is one such theme, the most evident, but far from the only one. (...)
More than a history book – and it's so important to know and understand the past in order to envisage the future – Decades of struggle for peace is an additional instrument for CPPC's intervention for its objectives and causes: the defence of peace, disarmament, solidarity and cooperation with the peoples of the world. If it contributes in any way to bring the deserved attention to this important and increasingly pressing action and serve to awaken more people to its need, then it will have fulfilled its objective.