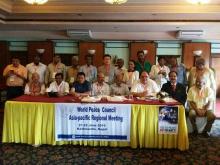 We are meeting once again at Kathmandu, Nepal on the eve of WPC’s Assembly to be held at Brazil on 17-20 of November under the theme of “STRENGTHEN THE PEOPLES’ SOLIDARITY IN THE STRUGGLE FOR PEACE AGAINST IMPERIALISM”

We are quite confident that this Assembly will be important one in taking stock of the past activities of the WPC and will adopt its policies based on proper analyses of the situation which will help us in building a strong and popular mobilization of masses world over to strengthen the struggles against imperialism and its all kinds of manifestations for achieving peace and social justice world over.

Present situation demands not only identify our main enemy and to carry forward our struggle but also necessitate a proper discussions about successes and also failure of our peace and solidarity movement in building popular mass movement in general and particular in Asia-Pacific region. We hope this regional meeting will discuss the challenges we are facing and our tasks how to meet these challenges then making traditional statements which somehow satisfy our organizational positions but hide its actual weaknesses.

Situation in Asia-Pacific Region
The situation in the area has remained complex and tense. The development in Asia-Pacific region becoming more complex and is passing through a very difficult phase linked with continuing deterioration in international situation. Unprecedented imperialist military build-up, plan for building up NATO like alliance in Asia with the increasing presence of US army, the stationing of nuclear weapons in South Korea, the build-up of these forces in South East Asia, the South Pacific, the South China Sea, the Indian Ocean, the Golf and the Middle East and along with this, a number of regional conflicts are persistently exacerbating the situation in the region. The mobilization of US forces shows the current approach of imperialism to secure hegemonic control over every aspect of contemporary human civilization, resources of nations, particularly the energy resources are leading to unbearable threats of military intervention. On the other side the geometrical increase in religious fundamentalism, extremism and all kinds of terrorism are jeopardizing the peace and stability in this region. Though the economic development is taking place in significant level there exist also immense poverty, illiteracy, deceases, malnutrition and underdevelopment resulting in sharpening of social and economic contradictions in this most populated area of the world.

At the same time the emergence of international finance capital and facilitating undeterred financial flows across the globe to seek short term speculative super profits led to pulling down internal, as well as, national barriers of sovereign laws and regulations. The drive for unhindered access to markets particularly financial markets had been the principle feature of this paradigm which has come to be globally recognized as globalization.

This imperialist globalization and its all pervasive sway need refashioning of national policies which would ensure compliance with the requirements of international finance. This had further led to the evolution of neo-liberal policies which in reality meant the redefinition of the role of Nation States. The State, in this new global dispensation, is forced to withdraw from its traditional function of providing welfare and facilitate social development in areas like education and health care. And, concentrate on promoting the unhindered interests of the market. In economy, this led to adoption of a low tax regime with commensurate reduction in subsidies for social services for the people. This has also led to large-scale privatization and handing over of the ownership and control of natural resources to private corporate.

There are twin attacks from imperialism and its neo-liberal economic offensive in this region and situation demands that countries of this region have to unite to meet these challenges but unfortunately that is not the case.

The most negative development are the problems among the countries in South Asia and South East Asia which in a way dividing the unity of the people and creating possibilities for external interference in this areas.

The problems in South Asia are deep rooted and linked with the British Colonial rule and their policy of “divide and rule”. Whether it is the question of borders among the nations, water sharing, communications, refugees and many others are the issues to be settled. While above problems are there at the same time people of this area facing almost same and similar problems of immense poverty, illiteracy, deceases, malnutrition and underdevelopment and religious fundamentalism, extremism and terrorism.

The growing manse of terrorism In Bangladesh, Pakistan, Afghanistan and in India are matter of great concern. The situation is getting more complex with constant attack on Rohingya Muslims in Myanmar.

In South East Asia, the emerging problem is the issue of South China Sea. While the USA has declared that it would deploy 60% of its military forces in the Asia-Pacific Region in order to secure the strategic interests of the USA, the development in and around South China Sea become an excuse for the USA to increase its military facilities in many of the ASEAN and other countries.

We believe that South China Sea is a disputed area where many countries are claiming their sovereignty over different small islands in that area. We also believe that the best way of finding solution is through political multilateral settlement with peaceful means and on the basis of the International Convention on the Law of the Sea of the UN of 1982 (UNCLOS).We underline the need for military de-escalation in the region from all sides and demand the withdrawal of the US navy from the area in particular.

The situation in Korean peninsula is also getting tense. The denuclearization and peaceful reunification of the peninsula is one of the key issues to guarantee the peace and stability in this region. The right of the DPRK to defend its country and borders from imperialist threats has to be supported. The military exercises of South Korea-USA-Japan around the Korean peninsula and to ongoing process of building Asian kind of NATO have to be opposed tooth and nail.

We are deeply concerned about the efforts to re-militarize Japan through change of legislation which is abolishing actually the article 9 of the Constitution with the deployment of Japanese troops abroad as part of the enhanced military cooperation and alliance of Japan with the USA. At the same time we salute the struggle of the Japanese people against the plans for a new US military base in Henoko (Okinawa) and the demand the closure of all US bases in Japan.

The WPC reiterates its support for the complete abolition of all Nuclear Weapons, as it was stated in the always relevant WPC “Stockholm Appeal” of 1953

All these developments force us to discuss the multi dimensional and comprehensive and interconnected nature of these challenges which threatens not only world peace but the very survival of the planet. The peace movements in our region cannot proceed in any meaningful way without assimilating the seriousness of these challenges and without evolving appropriate responses to them.

What will be our responses?
The challenges in our region has to be seen in the recent developments of new offensive initiated by US imperialist and their allies in Venezuela, Brazil, Ukraine and the dangerous development in West Asia particularly in Syria. This development has already created very negative impact in Asia-Pacific region particularly in strengthening the religious fundamentalist and terrorist groups. The imperialist agencies already have successfully used religious fundamentalism and terror as a tool, to divide the communities on religious line and destabilized normal and friendly relations among the countries. The people of Afghanistan, Pakistan, Bangladesh and India too are the victim of such policies.

While the imperialists and their allies are moving towards the militarization of this region, dividing the people on religious line and on other contentious issues we have to clarify where the peace movement of this region stands today. Is our approach and understanding of the situation, our strength, our way of functioning, our attitude towards other organizations and more over our activities are enough to meet the present challenges? Answer is NO.

The present character of peace movement in our region is much diversified and WPC member organizations are just one of the streams of this movement. We have to recognize the existence of growing social movement and their organizations in our region that includes all countries though there may be some exceptions. These movements have quite good influence in some countries particularly on the issue of solidarity with Palestine, Latin America and other social issues. They are active and ready to join with us if they are invited. We do believe this is the high time for us to take appropriate initiatives so that there can be convergence among the like minded organizations on the issue of peace, solidarity, development, social justice and good neighbourly relations among the nations to foil the imperialist machinazations in our region.

Moreover we have to change our style of activities which are limited to issue of press statement, seminar, conference etc. These are important but not enough. How long we are not in position to mobilize people on the street and confront our enemies, our organization will remain weak and cannot fulfill the tasks history boast upon us. Only through united, coordinated and consistent mass movement can defeat the imperialist mechanizations and can transform the region into an area of peace, cooperation, stability, and development.

Tasks
1. The major activities of WPC member organizations should be highlight the question of Peace and Stability. The important component of our activities should cover the issues of total nuclear disarmament, demanding closing of all US bases, stopping all foreign military exercises, supporting just peace proposals of different countries of this region.
2. WPC member organizations should take appropriate initiatives for forming broader platform with like minded organizations for mobilizing the people of this region in favour of such activities.
3. The negative effects of Neo-Liberal economic policies once again bring the issue of New Economic International Order in the forefront with new perspective. So the issue of alternative economic policies and sustainable development should be also the major activities of the WPC member organizations.
4. The threats of terrorism and religious extremism are one of the growing phenomenons in this region. This dangerous development is influenced by sectarian and fundamentalist ideologies which weakening and undermining the unity of the people thereby derailing the resolve and the united struggles of the people against imperialism.
5. The WPC member’s organizations have to organize appropriate activities in a way so that the people of this region can effectively fight back these forces.
6. The questions of Solidarity with the people of all continents are the central activities of WPC member’s organizations. The Asia-Pacific region was always in forefront of Solidarity activities. The WPC member’s organizations from this region have to redouble their solidarity with the people of Palestine, Korea, Cuba, Venezuela, Vietnam and other countries of the world.
7. All members’ organizations have to start all round preparations for the successful holding of the upcoming Assembly of WPC to be held in Brazil. 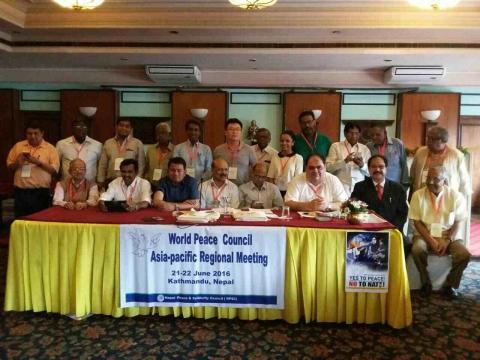 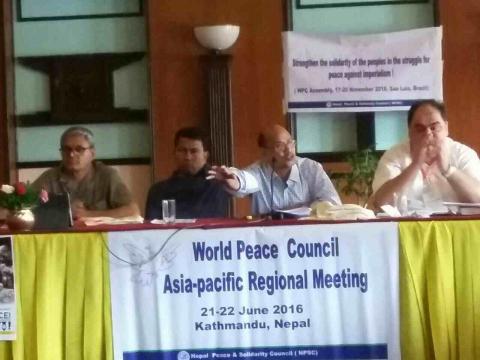 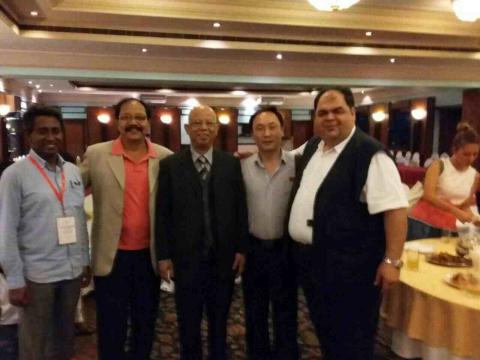 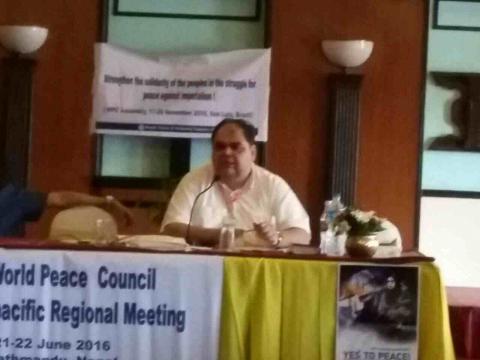 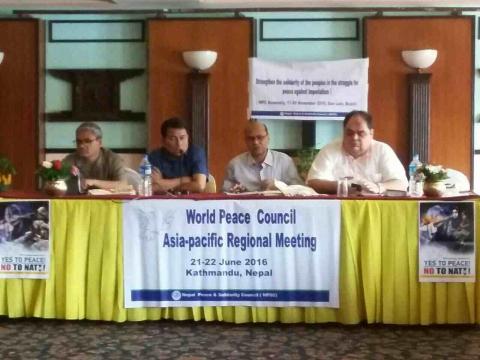