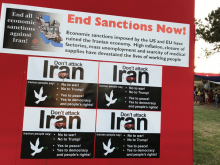 The assassination of Qassim Soleimani, the commander of the Quds Special Forces of the Islamic Revolution Guard Corps (IRGC), in an airborne attack on a convoy of vehicles at Baghdad airport early this morning has created a tense and extremely volatile situation in the Middle East. This, the Association for Defence of Peace, Solidarity and Democracy – Iran (ADPSD) points out, took place at the behest of the highest echelons of the US administration in violation of the sovereignty of the Republic of Iraq and in contravention of international law. The theocratic regime in Teheran has declared three days of mourning and has threatened decisive retaliation.
A number, as yet unconfirmed, of Iranian, Iraqi and Lebanese senior militia leaders were killed in this unprecedented and provocative attack early hours of Friday morning. The ADPSD condemned criminal act of US imperialism, which will raise tension in what is already a highly dangerous and unstable situation. The ADPSD has expressed its grave concern about the consequences of this calculated action which is likely to trigger further military action that will plunge the region into yet another spiral of violence.
The ADPSD believes that, irrespective of any justification whatsoever that might be put forward, if any war or military conflict between Iran and the US takes place, it will be a disaster for the people of Iran and for the potential for peace and progress in the country. Iran is already suffering from crippling economic, banking and monetary sanctions that have devasted its economy. Any war on Iran will inevitably strengthen the grip of the theocratic regime and thus weaken the people’s struggle for human and democratic rights and social justice.
The ADPSD holds that there can be no solution to the crisis in the Middle East while a number of countries remain involved in “devastating proxy wars for domination and for the furtherance of the influence of reactionary regimes including Israel, Saudi Arabia, Turkey and Iran.” The ADPSD is calling on all supporters of peace and detente to demand an end to the militarisation of the region and an immediate halt to further military action. The Middle East can and should become a zone of peace and détente, not one of war and destruction. This can only happen if the aggressive policies and actions of US-led world Imperialism and all reactionary war-mongering forces in the region are halted. The ADPSD believes that the first step must be the closure of all US and UK military bases in and surrounding the region.

Association for the Defense of Peace, Solidarity and Democracy - Iran