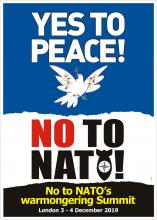 The North Atlantic Treaty Organization (NATO) will continue to mark its 70th years with a Heads of State and Government summit in London on 3-4 December 2019.

For 70 years, NATO has been the number one aggressive military tool of imperialism. It is the largest and most dangerous military organization in the world. Despite rivalries between its individual members and the contradictions these from time to time present, it remains inherently and deeply interconnected with the policies of the US and EU, its so-called 'European arm'.

NATO is responsible for wars of aggression against countries and their peoples – including Yugoslavia, Afghanistan and Libya – leaving an immense legacy of death, suffering, destruction and long-term environmental pollution and degradation.

NATO has continuously added members and partners and expanded its sphere of influence and intervention across the world.

NATO leads the arms race and global military spending, burdening the peoples. In 2018, the total war-related spending by all 29 NATO members totalled $963 billion, 53% of worldwide military spending – more than the remaining 164 countries of the world. Only NATO European members and Canada will spend 100 billion dollars more on militarism by the end of 2020.

At its London summit NATO will celebrate its superior military forces’ readiness for war. As its Secretary General has pointed out, “For the first time in history”, NATO achieved “combat-ready battle-groups; increased its presence in the east; tripled the size of the NATO Response Force; increased defence spending in all NATO allied countries for five years in a row and stationed more US troops in Europe”.

On the warmongering agenda of the next summit, and among other issues, the use of space, cyberspace and artificial intelligence for military purposes are up for discussion.

The US, with NATO support, withdraws from the Intermediate-Range Nuclear Forces Treaty (INF), a decision that poses a serious threat of a nuclear escalation and of the redeployment of US missiles in Europe, as happened with the Pershing II missiles in the 1980s, leading to mass peace demonstrations in defence of peace and disarmament.

The US and its NATO allies relentlessly increase their military activities and expand their bases and installations from the Caspian Sea to the Arctic, closer and closer to Russia, but also in the Asia-Pacific region, tightening the encirclement of China. This vast network of foreign military bases, the naval fleets, the so-called anti-missile systems and the systems of global surveillance, which the US and its allies in NATO have spread across Europe and the world, are instruments of their strategy of world domination. NATO’s objectives today are openly aggressive and its arena of warmongering stretches across the whole planet.

We appeal to all organizations and activists in Europe who defend the cause of Peace, to promote actions against NATO and its London summit, for the dissolution of this political-military block and in support of the immediate struggle within each NATO member state for withdrawal from this aggressive military pact.

Reaffirming and continuing the World Peace Council’s campaign “Yes to Peace! No to NATO!”, we appeal for mobilization and initiatives in every country, and on 3 December, for a strong presence on the anti-NATO demonstration in London, together with the British Peace Assembly, calling for:

• The dissolution of NATO!

• The right of the people in each country to unilaterally withdraw from the NATO!

• An end to escalating spending on war and an increase in funding for social progress and peace!

• The immediate withdrawal of all NATO forces involved in military aggression and occupation!

• An end to blackmail, destabilization and imperialist wars of aggression against sovereign states and peoples!

• Support for refugees, displaced people and other victims of wars which NATO, the US and the EU promote and pursue!

• Closure of military bases in foreign territory and the dismantling of US and NATO anti-missile systems!

• Abolition of nuclear weapons and other weapons of mass destruction and general disarmament, together with an immediate cessation of research and the development of lethal weapons

• A halt to the further enlargement of NATO!

• Respect of the principles of the Charter of the UN and International Law, namely the sovereignty and equality of peoples and states!