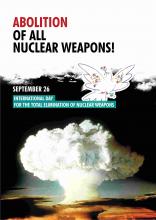 Today, given the dimension and power of the existing nuclear arsenals, a nuclear war between the main nuclear powers would not be limited to replicating the horror lived in Hiroshima and Nagasaki more then seventeen years ago, but would multiply it. Millions of human beings would die the moment of the explosions and the following months, with the effects of radiation on health and the environment lasting for many years, with catastrophic consequences, including the so-called "nuclear winter". Such a war would jeopardize the survival of Humanity itself.

Currently, it is pointed out the existence of more than 15 000 nuclear warheads in the world, held by nine countries (the USA, Russian Federation, United Kingdom, France, China, Israel, India, Pakistan and the Democratic Popular Republic of Korea). Five countries (Germany, Belgium, Italy, Holland and Turkey) formally host USA nuclear weapons. Particularly USA and other NATO member states also spread throughout the world, in numerous military bases and naval fleets, this kind of weapons. The US, in its strategic concept, admits the use of nuclear weapons in a first strike, position that NATO also follows.
Recalling that the Stockholm Appeal, a major historical initiative of the WPC, signed by hundreds of millions of people worldwide, concerned with the threat of use of these weapons, after almost 70 years remains topical and continues to stand as a guideline for our action, we appeal to all peace loving people to renew and reinforce the demand and action for the abolition of all Nuclear Weapons!

In the necessary path of defending peace, of détente in international relations, of ending the arms race and for the promotion of steps towards a universal, simultaneous and controlled disarmament, we consider that the Treaty on the Prohibition of Nuclear Weapons (adopted July 7. 2017) is a milestone leading towards the total elimination of these weapons. Its entry into force would be an important step towards removing the threat posed by the existence of nuclear weapons, for which all states should sign the treaty on the prohibition of nuclear weapons without delay.

(as agreed by the regional European meeting of WPC in London on 26th May 2018 to coincide with September 26, declared by the United Nations as International Day for the Total Elimination of Nuclear Weapons)