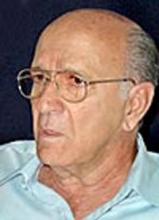 The World Peace Council anounces with grief the demise of our beloved comrade Orlando Fundora Lopez, President of honor of the WPC, at the age of 90.

Orlando Fundora joined the revolutionary movement in Cuba before 1954 as trade unionist in the banking system participating in numerous of struggles and actions for which he was jailed and tortured several times by the Batista regime. From his exile in Venezuela he continued his struggle along with the local revolutionary movement from 1957-1959,again jailed and heavily tortured by the regime.

Orlando Fundora Lopez dedicated his lifetime to the revolutionary and anti-imperialist struggle,to the just causes of the poor and opressed allover the world. The WPC is loosing a tireless champion of the struggle for peace and social justice, he will be remembered and will serve as example for the future generations.

The WPC expresses its sincere condolences to the Cuban Movement for Peace and Sovereignty of the Peoples, to his family and to the Communist Party of Cuba.