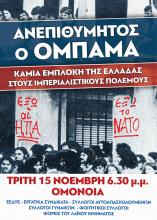 On 15th and 16th November US President B. Obama is visiting Greece.

We declare B. Obama as not wanted in Greece!

The Greek Committee for International Détente and Peace (EEDYE) is organizing along with dozens of trade unions, students and women associations, a protest rally on Tuesday 15th November at 6:30pm at Omonia Square of Athens.

In the light of the increasing aggressiveness of imperialism through the policies of the USA, NATO and the EU, the recent NATO summit in Warsaw and the growing imperialist intervention in the Middle East, the visit of the US President to Athens,is aiming in the consolidation of the cooperation of the Greek government with all the above, by offering old and new military bases and facilitation to the USA and NATO.

NATO’s welcomed presence in the Aegean Sea, with the pretext of the refugees who are the victims of the same imperialist agenda and the plans to deploy NATO troops along the Russian borders and a “missile defence shield” are alarming elements in the current situation.

There cannot be any kind of illusion that the visit of US President Obama to Greece,as it is propagated by the Greek government, is creating stability in the region while Greece is entering deeper into the imperialist plans and antagonisms.

Therefore the Greek Committee for International Détente and Peace (EEDYE) together with dozens entities from the Trade Unions, the Women’ Organisations, Students’ Associations and Organisations of the self-employed, gathered in a preparatory meeting on 4th November and call for a massive protest rally on 15th November under the following slogans: