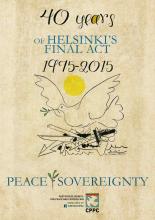 Solid path for Peace, for the future

On August 1, 1975, representatives from 35 countries (33 from Europe, and the US and Canada) signed in Helsinki, the Final Act of the Conference on Security and Cooperation in Europe, culminating a process started two years earlier. For the first time in history, such a large number of countries converged around an important set of principles governing international relations, collective security and development of relations of cooperation among States, among which stand out relevant matters like: sovereign equality of States; non-intervention in the internal affairs of States; peaceful settlement of international disputes; respect for human rights and fundamental freedoms; equal rights and self-determination of peoples.

The Conference also resulted in important conclusions on issues as diverse as: refraining from the use of force and the threat of its use as a means of resolving issues under dispute; recognition of frontiers established in Europe following World War II; simultaneous dissolution of the North Atlantic Pact and the Warsaw Pact or, at first moment, the dissolution of their military organisations; end of the arms race of all types; creation of nuclear-free zones in various regions of the world (including Europe); widespread nuclear disarmament, with downsizing of men and weapons gathered in various parts of the world, notably in Central Europe; overall reduction in military spending, especially by the great powers; adoption of measures to prevent the risk of accidental outbreak or deliberate provocation of military incidents; establishment of relations of cooperation.

The scope of its decisions, given the times when it was achieved and what it actually contributed to the détente in international relations (during the years of the so-called "cold war"), the Conference and Act of Helsinki are down in history as an important step on the path for peace and disarmament, key issues for justice and the social progress of mankind.

The signing of these agreements was made possible by the constant and concerted action of some States which, together with millions of people and social movements from around the world (including the World Peace Council), forced the forces of war, militarism and aggression - weakened by the defeats suffered in Vietnam and the various liberation processes carried out during those years, including the April Revolution in Portugal - to accept, or at least to say so, principles which hitherto they had always rejected.
The important principles set down in the Helsinki Act were put into question soon after the end of the Soviet Union and the bloc of socialist countries of Eastern Europe in the early 90s, leading to the proliferation of wars of aggression against sovereign countries, to start with the aggression against Yugoslavia (a State which then chaired the Movement of Non-Aligned Countries), launched by the Western powers, with the leading role of the US and its allies.
By signalling this anniversary, it is fair to remember the participation of Portugal born of April [Revolution] in the preparation and signing of the Helsinki Act, the latter by the hand of the then President of the Republic, Francisco da Costa Gomes, who came to be known for his active involvement in the cause of Peace and in CPPC, which he came to preside.
The best celebration of the Helsinki Act is to continue to mobilise wills and energies so that, once again, it may be possible to reach agreements aimed at a détente in international relations (whose militarisation continues to mount), the end of the arms race, respect for the sovereignty of States and for Peace.
The principles that Helsinki established, cannot only be voted to the history books, because they remain today as the most solid path for the future of humanity, as indeed the Portuguese Constitution provides in Article 7:

1. In its international relations Portugal shall be governed by the principles of national independence, respect for human rights, the rights of peoples, equality between states, the peaceful settlement of international conflicts, non-interference in the internal affairs of other states and cooperation with all other peoples with a view to the emancipation and progress of mankind.

2. Portugal shall advocate the abolition of imperialism, colonialism and all other forms of aggression, dominion and exploitation in the relations between peoples, as well as simultaneous and controlled general disarmament, the dissolution of the political-military blocs and the setting up of a collective security system, all with a view to the creation of an international order with the ability to ensure peace and justice in the relations between peoples.

3. Portugal shall recognise peoples’ rights to self-determination and independence and to development, as well as the right to insurrection against all forms of oppression."

National Board of Directors of CPPC