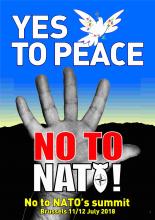 We appeal to all organizations and activists in Europe that defend the cause of Peace, to promote actions against NATO and its summit in Brussels, for the dissolution of this political-military block and in favour of the struggle of each people within each NATO member state for withdrawal from this military organization.

We recognize that NATO has now existed for almost 70 years, and that during this entire period NATO has continued to increase its membership, in expanding its sphere of influence, its aggression and its demands on the people.

We recognize that NATO has continued to exist, without any interruption in its role, through many changes of governments in all its member states, including the US.

We recognize that it is important to concentrate on raising public pressure and attention to NATO and its imperialist nature, instead of concentrating on a particular leader.

Reaffirming and carrying on the WPC’s campaign “Yes to Peace! No to NATO!”, putting the governments of the NATO member countries in front of their responsibilities, we appeal for mobilization and initiatives in each country, claiming:

• No to increased military spending for war, devotion of money to social progress and peace;

• Withdrawal of all NATO forces involved in military aggression and occupation;

• The end of blackmail, destabilization and imperialist wars of aggression against sovereign States and peoples;

• Support of refugees, and other victims of wars which NATO, the US and the EU promotes and pursues;

• Closure of military bases in foreign territory and the dismantling of US and NATO anti-missile systems;

• Abolition of nuclear weapons and other weapons of mass destruction and general disarmament;

• Opposition to the further enlargement of NATO, namely into the Nordic countries, the Balkans, Eastern Europe and Cyprus;

• Respect of the principles of the founding charter of the UN and of the sovereignty and equality of peoples and states.