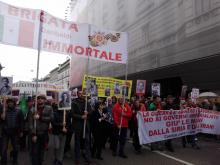 Committee against war Milan (CCLGM, Comitato Contro la Guerra Milano), celebrated 74th anniversary of The Liberation of Italy from Nazi-fascism by participating in the official national parade in Milan on 25 of April 2019, by carryng four large banners and two smaller ones, the first big banner "La brigata Garibaldi Immortale " (Immortal Brigade Garibaldi) in wich the CCLGM remembers both the fallen partisans and communist fighters of the Garibaldi Partisan Brigades during the WWII.

This year, the CCLGM made an internationalist and anti war demonstration, in fact, inside the flyer distributed via the web and in hundreds of paper copies before and during the parade, we recalled the sacrifice of the people of the Soviet Union, whose immense sacrifice, with 26 million deaths, should be honored by continuing the fight against the imperialist aggression war of the USA and NATO.
Together with us, the veteran of the Red Army Semion Kantor, 94, marched, applauded and greeted by the people.
Immediately behind the banner of the Immortal Brigade Garibaldi, many Russians and Italian comrades holding placards with pictures of relatives and heroes who died from the liberation war.
With us, after our other banner, that of the Committee Against the War Milan, also a great banner praising the freedom and sovereignty of Africa held by African comrades, against colonialism and the CFA franc, two small banners, one of the Ecuadorian community with so many placards for the release of Julian Assange, Vice President Jorge Glass and against the betrayal of Moreno that is evolving into a dictatorship, and the other of the comrades of the Popular Liberation Front of Sri Lanka (JVP) whose country recently struck by Islamist terrorism , in closing the piece of parade, the big banner in support of the Bolivarian Venezuela and Nicolas Maduro against imperialist aggression : "Maduro legitimate President".

Thus, on the day of the Liberation, despite the by now usual presence of political forces that have abandoned the ideas of the Partisan Resistance, animated mainly by the working class, fulcrum of our Republican Constitution, many have appreciated and have accompanied us adding to our clip of procession, with the right contents:
No to imperialism! No to neocolonialism! No to war! Long live the Garibaldi Brigade and our partisans! Long live the Red Army! Long live the workers, always in the front line against fascism, war and injustice! 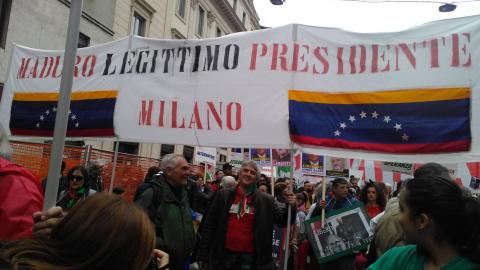 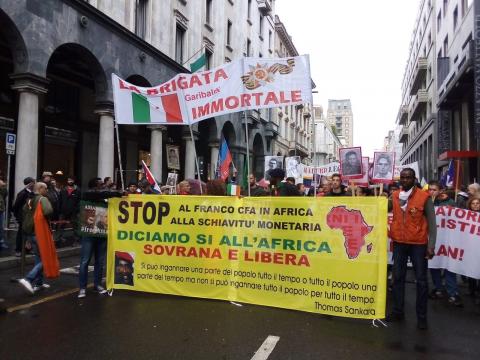 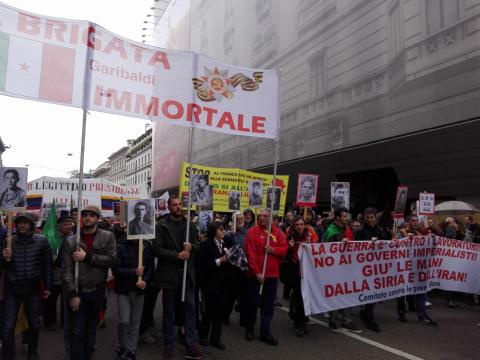 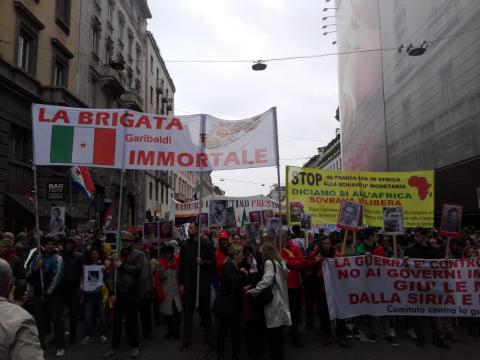