Once again this March, the Belgrade Forum for a World of Equals, the Club of Generals and Admirals of Serbia and other independent non-party associations in Serbia pay tribute to the victims of NATO 1999 aggression on Serbia (FRY). This aggression took lives of more than thousand defenders, military and the police and their officers, and also of thousands of civilians, including 87 children. Regrettably, the final list of the civilian casualties has not been determined as yet, although the number is estimated to stand at over 3,000. About 10.000 people were wounded. However, the number of those who lost their lives after the end of the aggression due to sustained heavy injuries, or from unexploded cluster bombs, chemical poisoning that resulted from the destruction of refineries, transformer stations, chemical factories and, in particular, due to the delayed effects of the use of missiles with depleted uranium, most likely, will never be precisely determined. There is a certainty, though, of a large scale of victims of the cancerous diseases never heard of before the aggression, with no end of the suffering of the people at sight. The direct damage from the devastation of the industry, infrastructure, residential buildings and facilities of public importance, was estimated to exceed $ 100 billion.

This year, March 21st the Central Military Club of Serbia in Belgrade served as the venue for the Conference titled “NATO Aggression 19 Years On - Aggression Continues”. Among the guests were General Aleksandar Živković, State Secretary in the Ministry of Defense, Colonel Iriškić, of the General Staff of the Serbian Army, Ambassadors of Belarus Valery Brilov and of Palestine Muhammad Nabhan, representative of the Embassy of the Russian Federation Colonel Koronyenko, as well as representatives of other embassies of friendly countries, and coleagues from Montenegro, the Republic of Srpska, Germany, Macedonia, and others.

The Conference was also attended by about 150 members and friends of the Belgrade Forum for a World of Equals and of the Club of Generals and Admirals of Serbia, including three former Chiefs of Staff of the Army General Branko Krga, General Dragoljub Ojdanić and General Miloje Miletić.

Tribute to the victims - stop military exercises with NATO in 2019

The participants of the Conference unanimously endorsed two appeals. The first addressed to the state authorities to declare moratorium on all military exercises of Serbia and NATO in 2019, as the year marks the 20th anniversary of the aggression, and thus pay tribute to the fallen defenders of the motherland and the civilian victims of this NATO aggression. The second is to invite all peace-dedicated organizations, movements and individuals to engage with a view to halting further rise of tensions and the deepening of mistrust in global relations, to stop the arms race and expansion of foreign military bases, to promote dialogue, partnership and equality as the only basis of normal relations between the countries, stability and development in the world, so to eliminate causes of the growing danger of a global conflict.

“Political processes preceding the 1999 NATO aggression has not been finished as yet” - said the first speaker Momir Bulatovic, the war Prime minister. He said: “In order to justify criminal act of aggression and preserve Alliance’s credibility they invented our apparent crimes. They created exodus of Albanians falsifying justification for the bombardment. For those who are open to see the truth this has been proved even in Hague tribunal”- said Bulatovic.

The professional presentation of General Slobodan Petković on the catastrophic consequences of the use of missiles filled with depleted uranium on human health and the environment has attracted great attention. He revealed that a massive use of the missiles with depleted uranium began in the final days of the aggression when it became clear that the agreement on termination of the aggression was impending. Hence, it may be inferred that the leading countries of NATO were in a hurry to get rid of such missiles containing nuclear waste, before the opportunity would disappear.

Blow to the European security system

President of the Belgrade Forum, Živadin Jovanović, said that to talk about NATO aggression today means to talk about gross violation of the international laws, the UN Charter, the Final Act from Helsinki, and the Paris Charter. By circumventing the UN Security Council, NATO has created a precedent using it later on for a chain of other aggressions in Afghanistan, Iraq, Libya, Mali and other countries. Such a practice has led to the globalization of interventionism and destabilization of the entire planet. This was not the most severe blow to the European and the global security system, from which neither Europe nor the world managed to recover to this day.

Speaking about this aggression inevitably reminds us on the alliance between NATO and the terrorist KLA which led to the ethnic cleansing of over 250.000 Serbs from the Serbian province of Kosovo and Metohija who still are waiting to return freely and safely to their homes and fields. Over 150 Serbian churches and medieval monasteries a number of which belong to the world heritage under UNESCO custody had been destroyed during and in the aftermath of the aggression. The Aggression continues in so far occupied and stolen Kosovo and Metohija has proclaimed unilateral secessions in 2008 in spite of being under UN mandate, solely by support and recognition of that illegal act by the governments of the most of NATO and EU member countries. This is also precedent which has been invoked in a number of other cases and will be invoked even more frequently in the future.

At the April 1999 Washington Summit marking 50th anniversary of its foundation NATO leaders abandoned the defensive and adopted offensive strategy of expansion to the East, in fact, to the Russian western borders. To date, NATO pursues the same strategy even if in a quite different global distribution of might. Presently, the root causes of the danger for peace are to be found in the denial of a new balance of power that is indicative of multi-polarity, and in the delusions that the privileges of the leading NATO members acquired over the past decades may be defended by military force, that is, by nuclear weapons – contends Jovanović. He went on to say the West is having great difficulties in adapting to the new realities of a multi-polar world. The only way to bring the world back to stability, peace and development is to abide with the principles of equality, partnership and mutual respect.

He added that, 19 years since the aggression, the leading members of NATO seek to vindicate this crime against the peace and humanity. To that end, they are attempting to coerce Serbia to participate in drawing of the new international borders in the part of Europe, in creation of another puppet criminalized state stealing the part of the Serbia’s state territory. The imposed timetable and solution fitting someone else’s geopolitical goals, in the opinion of Jovanović, cannot result in a peaceful and sustainable solution, but will rather lead to further build-up of conflict potential in the Balkans. The position taken by Europe, most notably by Germany and the United Kingdom, as well as the USA, on how to resolve the matter of status of the Serbia’s Province of Kosovo and Metohija, will reveal whether Europe is on the course of stabilization and development, or is hopelessly stuck on the path to further deepening of instability, weakening of identity and missing development opportunity. This is reminiscent of the situation in 1938, when some European leaders met in Munich naively believing that sacrificing the Czechoslovakian Sudetes would bring peace and stability. In fact, they become entangled in war – warned Jovanović. He emphasized that only a balanced compromise based on the UN SC Resolution 1244, coupled while observance of the sovereignty and territorial integrity of Serbia, is capable of guaranteeing the sustainability of peace and the stability in the Balkans and in Europe.

Jovanović pointed out that, in the meantime, the NATO aggression has evolved from its military format into other forms, all having the same goals: stealing Kosovo and Metohija from Serbia, drawing new international borders, creating a new Albanian state on a part of the state territory of Serbia, and dividing the Serbian people to those south of this presumed new border making them to be yet another national minority, and to those north of the border remaining in the central Serbia. Attempts are underway to coerce Serbia, with pressures and threats, into collaboration in this geopolitical project by having her refrain to oppose the admission of this illegal construct in the membership of the United Nations. The form is - signing a “comprehensive legally binding document” particularly advocated by Germany. The aggression continues also by telling Belgrade that “none has the right to veto the creation of the armed forces of Kosovo”, regardless of the territory of the Province of Kosovo and Metohija still being under the UN mandate. The two-year timeline for the ‘delivery’ recently set for Serbia by the EU European Commission, the USA has subsequently reduced to a year, thus demonstrating its dissatisfaction not only with the pace of ‘delivery’ but also with the inefficiency of the European Union.

The public position of senior NATO echelons is that none is forcing Serbia to accept membership, that Serbia alone is entitled to assess her priorities and interests, though NATO remains open. At lower levels and through the so-called non-governmental sector financed by the funds originating from the member states, however, the points made are that joining NATO is but a natural result of the Serbia’s European (EU) option, that Serbia is encircled by NATO members, that membership bestows huge advantages but does not imply participation in all NATO interventions since this is the matter of own discretion of each member, and so on. It is becoming ever more apparent that NATO is disturbed by anti-NATO public opinion in Serbia whose some 85% of the total population are against membership. This worrying reality prompts NATO to invest great efforts and huge financial resources into portraying NATO as promising, democratic, peace building alliance. Relying on the IPAP (Individual Partnership Action Plan), NATO expects that Serbian official and unofficial structures do contribute to a positive, friendly image of NATO in the public of Serbia.

Jovanović recalled that there are other neutral countries in Europe which are surrounded by NATO and yet do not feel threatened nor forced to consider formal accession to it. He cited examples of Austria, Switzerland, and Sweden. Where a country borders with several member states of NATO, this should not imply that, by virtue, NATO poses a threat to the same – said Jovanović. The countries which joined NATO in the period following 1999 aggression on Serbia (FRY) at a short notice, have different historic experiences, they were no strangers to affiliation in military treaties, have not been neutral or non-aligned and, none of them has genuinely experienced the true meaning of the offensive character and strategy of NATO endorsed at the 1999 Summit in Washington. After all, pointed Jovanović, each country is entitled to own free choice. Serbia’s choice is military neutrality and let it stay so.. She should nurture this neutrality, affirm and strengthen it, by acknowledging the past experiences, tested alliances, and friendships. Serbia is an open, peaceful country and does not fit in a military alliance of an offensive character – concluded Jovanović. 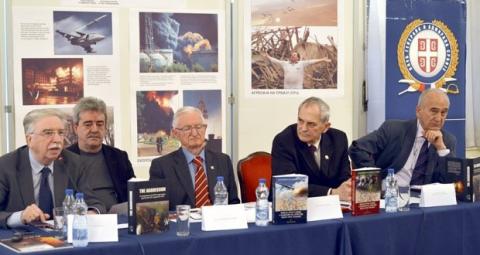 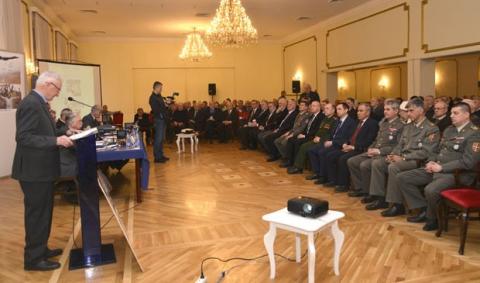