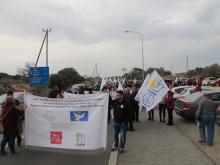 Within the programme of the trilateral, a scientific conference on peace issues was organised in Nicosia with the theme "Undermining Peace in the Mediterranean: Energy Issues and Cyprus; the Greek-Turkish Relations and the Relations between Turkey and the Turkish Cypriots". Moreover, a "No to War" demonstration was helde outside the Dhekelia British Base Police Station.

Below you can see the final statement prepared by the three organisations.

We held our meeting at a time that can be characterized by the intensifying of imperialist offensiveness and aggressiveness all around the world but especially in our neighborhood. The crucial broader area covering Caucasus and Ukraine, towards Balkans, Eastern Mediterranean, surrounding Middle East and North Africa it is today, as it was from Decades an important target for imperialists. Gas, petrol, pipelines, transitional stations are all in this area as well as more than a quarter of Earth’s population. Millions are threatened to be vanished if we do not oppose and destroy the plans of imperialism for our region. We believe that the fundamental cause of these dramatic moments is the imperialist’s plans, and more specifically of the USA, to impose changes in line with the concrete plans for the "New Middle East" plan.

Lately we are encountering even more terrifying developments in Eastern Mediterranean. The escalation of warfare in Syria by imperialist forces, the engagement of Russia on the call of Syrian Government in the war against the so - called Jihadists, the terrorist attacks in Turkey, Lebanon, and France and against a civil Russian plane, formed a very dangerous and unpredictable war scenario in our region. In addition and in relation to these, the tragedy of hundreds of thousands of persecuted people who have been displaced by force and became refugees, struggling with waves in the Mediterranean Sea, is continuing.

In recent months, we have been watching the tragic flow of refugees from Turkey to Greece. Despite the mortal dangers, thousands of people have been trying to cross the Aegean Sea by any available means. This route has proved to be fatal for many of them. Many of the victims are babies and small children. Our role, however, is to identify those responsible for this barbarity, to organize and incite the peoples to rise up against them. We are addressing the people, the youth, and the working people; we call upon them to join the struggle, to show our solidarity with the refugees and migrants, and to demand:

- That the US, NATO, EU and other imperialist forces stop their interventions and wars.
- That the Dublin Regulation and the Schengen Agreement be abolished together with Frontex and the other repressive mechanisms of the EU. No to EU repression at the frontiers.
- Transfer of refugees from the islands and points of entry to the countries of their final destination, for which the EU and UN will be responsible.
- Creation of decent, human centers to receive and accommodate the refugees. Increased staff and infrastructures are also required to save, register, identify, house, feed and provide them with health care.
The Middle East already counts millions of deaths in the last five years in Syria, Libya, Iraq and Palestine. Today we believe that life itself in the world is threatened and not a so called western democracy. The imperialist policies foment the explosion of a generalized war and nourish even more storms that lie ahead.
What do they want in Syria, Iraq and Libya the Western imperialists, their reactionary allies in the region, Turkey and monarchical regimes? Who bred the "jihadists", the "Taliban" and why? The answer is clear for those who hate war and love peace. It's the oil, energy pipelines, strategic passes, and new markets for the international capital.

All these must awake our peoples and raise anti-imperialist resistance because a possible generalisation of the conflict will lead our region to disaster. Although a world war has not started yet, the developments in our region reflect a prototype of a world war. In the past few months, the imperialist-led attack on Syria has passed onto another stage. The reactionary forces, established and strengthened with the help of imperialist powers have not been successful in overthrowing the Syrian Government, they could not overcome the resistance of the Syrian people, who have been determined to retain their sovereignty.

The situation in Syria is very closely related and with the policies of the Turkish government. The ruling party, AKP, has been actively involved in supporting and also in arming the so-called opposition in Syria, since the beginning. Many written documents and films have provided enough proof of this active support, adequate to have the government officials be tried on war crimes. However, the resistance of the Syrian people has turned AKP's policies upside down and the Neo-Ottomanist policy has failed. Although it has been taking more precautions recently, the evidence shows that the Turkish government is continuing to support the Syrian opposition, including the ISIS. And more and more evidence of the Turkish government's involvement with ISIS in oil trade is getting to surface. AKP’s and Erdoğan’s war crimes have been and will continue to be a major issue on the agenda of our peace organizations.

Our common goal and the focal point of our struggle are to prevent our countries from participating in imperialist wars. We demand the abolition of all military bases in our Countries. We demand from the Governments of our Countries to stop providing infrastructure to the unjust expansive and predatory wars. They have no right to engage the peace loving peoples of Greece, Turkey and Cyprus in their monopoly dark plans and games.

We call on the working class, the small and middle farmers, the youth, the women, the poor pensioners to wage a common struggle against imperialist plans and Governmental policies in our Countries that serve those plans. In addition, we call on all the peoples of the region to be vigilant and to resist. In the above framework, we salute the Turkish peace-loving anti-imperialist forces, which continue to fight inside Turkey against the plans leading our region to catastrophe.

Furthermore, the fraternal Peace Committees of the three neighbouring countries address militant greetings of solidarity and convey anti-imperialist messages of friendship and solidarity to the Greek and Cypriot working people who are waging the class struggle against the fierce aggressive policy of big capital, expressed in antipopular austerity memorandums imposed by their Governments and the Troika on the pretext of global economic crisis.

Within this complex and reactionary political framework the struggle of the people of Cyprus to reunite its Country is continued under negative international political and ideological correlations. We denounce any actions by imperialist powers that aim at exerting pressure on Cyprus and searching for ways to intervene to impose a solution that will serve their own interests in the best possible way. Cyprus division is due to well known imperialist plans.

We support the anti-occupational bicommunal struggle of Cypriot people as permanent division isn’t an option but a catastrophe. The reunification of Cyprus takes on an even greater necessity today and for stopping the assimilation of Turkish – Cypriots due to the Turkish policy of transferring more and more settlers to the occupied area of Cyprus. The need for reunification is also expressed by the intensification of the long-standing struggles of the progressive Greek and Turkish Cypriots for reunification, peace and abolishment of British Bases and withdrawal of all foreign armies.

Our trilateral meeting supports a solution based on the resolutions of United Nations on the Cyprus problem, the High-Level Agreements of 1977 and 1979 and the principles of International Law. We support as the only possible solution a bi-zonal, bi-communal federation with a single international personality, a single sovereignty and a single citizenship, with political equality that ensures the fundamental freedoms and human rights of all Cypriots. We support an independent Cyprus free from all troops, guardians and bases.

As three peoples suffered from the efforts of imperialism and the ruling classes of our countries to bring us into conflict, we express our solidarity with the Palestinian people, and the mass peace-loving forces within Israel. Once again we stress our position for a just solution of the issue. We support the struggle of the Palestinian people to achieve their Independent State within the borders of June 4th 1967, with East Jerusalem as its capital. We demand the return of Palestinian Refugees on the basis of UN Resolution 194, stopping all settlement activities in the Palestinian territories, releasing all Palestinian prisoners from Israeli prisons, ending the unjust siege of Gaza strip from Israeli side. We as well support the right of the Palestinian State to be a full member of UN.

The peace-loving anti-imperialist movements of our three neighbouring countries follow the critical situation of the Kurdish problem and stress our support for a just and peaceful solution that will be based on equality and the friendship of all the peoples of Turkey. First of all, we call for an end to the bloodshed through a mutual ceasefire. We consider that the Kurdish problem under no circumstances can be considered as a problem between the peoples that have lived together for centuries, but as a problem that was created by the ruling classes and the imperialist forces. We call on the peace-loving peoples, Turkish and Kurdish, to stand side-by-side for peace and equality against the nationalist and imperialist forces aiming to divide them.

The anti-imperialist peace-loving organisations of Cyprus, Turkey and Greece, together with the World Peace Council, also demand the abolition of all nuclear, chemical, biological weapons as well all the weapons of mass destruction. We are also against the establishment of Nuclear Plants.

The Greek Committee for International Détente and Peace, the Cyprus Peace Council and the Peace Association of Turkey with the assistance of WPC, decided to create a joint action programme, and stressing a call on the peoples of our region to strengthen their solidarity and common struggle for the overthrow of the imperialist schemes. The peoples will resist against imperialist organisations such as NATO, EU and IMF, against the interests of their persecutors and exploiters and pave the way for a society of peace, social justice and progress. 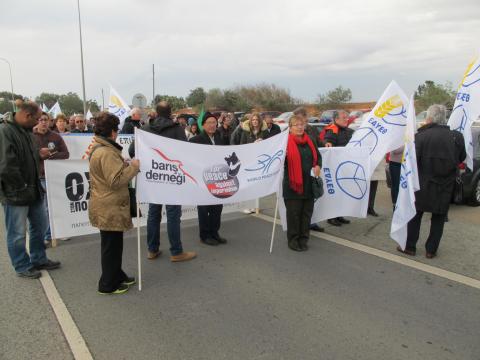 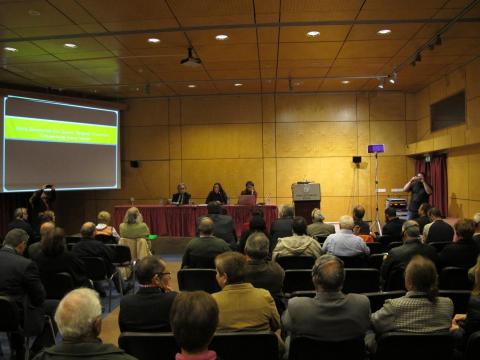 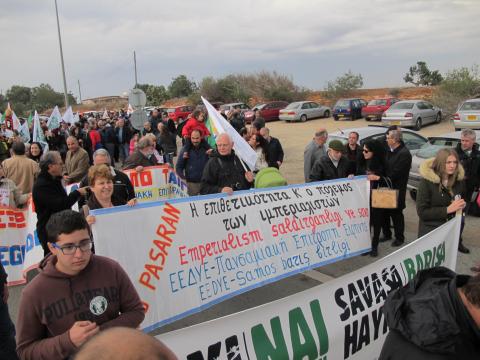 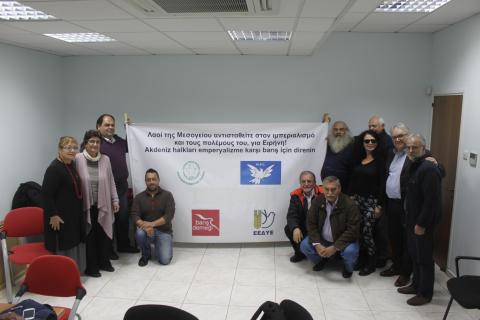