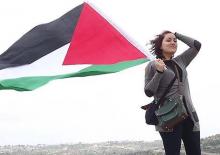 We would like to draw your attention to the recent provocative deportation of comrade Moara Crivelente, member of the CEBRAPAZ, by the Israeli border authorities on her way to visit the Palestinian Territories. Moara Crivelente was denied entry to Israel and thus to the occupied lands of Palestine and after hours of interrogation and temporary detention she was banned for 10 years to enter Israel.

The WPC denounces this action by the Israeli authorities which is aiming at the intimidation of people and forces who stand in solidarity with the palestinian cause, for the establishment of an independent State of Palestine within the borders of pre-4th June 1967, with East Jerusalem as its capital.

The detention and deportation of comrade Moara Crivelente consitutes a provcation against the peaceloving forces in the world, against all people who stand for justice and equality and for the implentation of the relevant UN resolutions on Palestine.

The WPC expresses its solidarity with CEBRAPAZ and our comrade Moara and declares that we will continue our struggle and efforts in solidarity with the Palestinian people for the end of the occupation and the release of all political prisoners from Israeli jails as well the right for the return of the Palestinians to their homelands based on the UN resolution 194.

We demand the recognition of the State of Palestine by the UN and all its member States immediately!